Washington, D.C. — March 8, 2018 — In response to South Korea’s announcement at the White House that President Trump has accepted Kim Jong-un’s invitation to meet in person, Kevin Martin, President of Peace Action and convener of the Korean Peace Network, released the following statement:

“Kim Jong-un reiterating his country’s commitments not to test nuclear weapons or ballistic missiles during ongoing diplomacy is excellent news, as is President Trump accepting Kim’s invitation to meet in person for the first time. North Korea is putting virtually all topics of concerns on the table. Trump now has the opportunity to achieve what no president has been able to achieve in seven decades of U.S.-North Korea relations, make real strides towards lasting peace on the Korean Peninsula.

“That said, President Trump’s expressed desire for praise is telling. If claiming credit for this diplomatic opening is what Trump needs to do to get behind a strategy of ‘maximum engagement,’ so be it. But let the record show, it wasn’t Trump’s bluster or the ‘maximum pressure’ campaign that brought North Korea to the negotiating table, it was President Moon’s willingness to engage without preconditions that made this diplomatic breakthrough possible.”

The Korea Peace Network is a group of peace, arms control, and Korean-American activists working for peace on the Korean Peninsula. 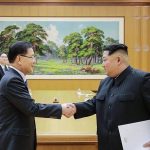 In Letter to Trump, Over 200 Organizations and Individuals Call for Maximum Engagement in KoreaPress Release 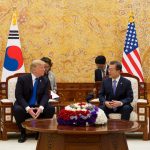 New York Times – Korea Talks: Might They Lead to Peace?In the News