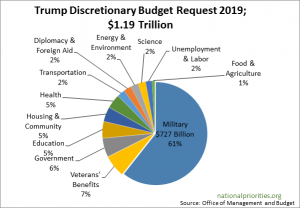 Did you know the Pentagon eats up over 60% of all Federal discretionary spending? On top of that, the U.S. spends far more on its military than any other country in the world. In fact, it spends more than the next seven countries – China, Russia, Saudi Arabia, India France, the United Kingdom and Japan – combined.

Budget Control Act caps (aka “Sequestration”) have already deeply cut Federal support for education, food programs, housing, transportation, and green energy, and the Republican majorities in Congress plan to make further cuts this year, while preserving the caps. Making reductions to the Pentagon’s oversized budget could free up the funds we so desperately need to make necessary investments in our countries future. Below are examples of programs we should “Move the Money” from.

The Overseas Contingency Operations (OCO) account is a “slush fund” that allows the Pentagon to spend far in excess of sequestration limits. Originally conceived as a way to shield spending on war from the same cuts every other program was subject to, it now includes pork-barrel spending on projects like routine base construction, additional parking lots, new dormitories, etc. All of these items should rightly be paid for out of the Pentagon’s base budget.  A report on what exactly was spent from the OCO account is needed for transparency and to ensure that the account is used only for truly unforeseen items and not as a slush fund to circumvent the base budget caps.

In FY2017 the President requested $64.6 billion for OCO, including $45.1 billion for continuing U.S. military operations in Afghanistan, $9.9 billion for operations against the Islamic State in Iraq and Syria. Not wanting to get left out in the process, in Congress the Republican majority’s budget resolution increased OCO spending to $82.4 billion – a 41% increase over last year and far beyond what the Pentagon has determined is needed for current U.S. wars.

It’s time for Congress to end this charade, cut the OCO, and debate and fund military operations through the normal budgetary process so that normal controls and decision making can prevail.

The F-35 is the most expensive weapons system in U.S. history with a lifetime price tag of $1.5 trillion for 2,440 planes, and with nearly 70% in cost overruns since 2001. It’s time to cut this boondoggle, but expect a fight as the plane accounts for nearly a quarter of its manufacturer’s – Lockheed Martin – revenue.

The F-35 has performance problems, management problems, and cost problems.  Its $80 billion in project cost overruns and waste is over 100 times the amount of taxpayer losses from the Solyndra solar energy project, Republican lawmakers’ example of choice when they decry the efficiencies of “big government.”  Even Sen. John McCain, chair of the Senate Armed Service Committee, has been a vocal critic of the F-35 in the past declaring it “has been both a scandal and a tragedy.” A CBO study showed that the DoD could save $48 billion over 10 years by canceling the F-35 program and purchasing existing models instead.

The Cold War is long in the past, yet the cost of maintaining and modernizing our nuclear weapons is expected to be $1.7 trillion over the next 30 years. The FY2016 budget includes (over 10 years) $80 billion for a new long-range bomber, $90 billion for new nuclear submarines, $11 billion to refurbish the B-61 nuclear warhead, $30 billion for a new nuclear-armed cruise missile, upgrades for land-based ICBMs, and money for new nuclear weapons production facilities. These weapons must never be used, and they make us less safe, creating a modern arms race in which other nuclear powers seek to modernize their own weapons and by undermining our non-proliferation rhetoric. The SANE Act, named after Peace Action’s founding organization, and sponsored by Sen. Markey and Rep. Blumenauer, (S.831/HR.1534) provides a legislative vehicle to cut many of these programs.

As the Trump administration and the Republican majority in Congress look for draconian cuts in health care, education, childhood assistance programs, clean air and water, and good family-sustaining jobs, an alternative, progressive vision for the federal budget has emerged. It’s called The People’s Budget, and it is championed by many of the pro-peace members of Congress Peace Action has worked hard to get in office. The People’s Budget adjusts the pace of defense savings and finds other targeted and efficient savings in the budget. The budget focuses on modern security needs by repealing sequestration cuts and spending caps that affect the Pentagon, and replaces them with similarly sized reductions that are less front-loaded and will allow more considered cuts. The budget provides $65 billion in budget authority for Overseas Contingency Operations (OCO) for FY2017—the same as the baseline and enough to fund full and safe withdrawal from Afghanistan—after which all OCO funding is ended. Responsibly reducing OCO spending alone would save $851 billion over FY2018–2027 relative to current law. With these and other savings, and progressive changes to tax code, the People’s Budget lays out a true path to strengthen our social safety net, invest in our infrastructure, invest in public education and improvements needed in our country’s health care system. You can read more about the People’s Budget here.