Washington, D.C. — May 24, 2018 — President Trump cancelled the planned June 12 summit meeting with Kim Jong-un today in a letter to the North Korean leader. Kevin Martin, President of Peace Action, slammed the president and his administration for undermining the critical peace process.

“I can only channel the immortal Casey Stengel, manager of the notoriously inept 1962 New York Mets, who quipped, ‘Can’t anybody here play this game?’ Trump and his war cabinet, with no record of achievement in international peace and diplomacy, couldn’t resist provoking North Korea with talk of a ‘Libyan model’ of denuclearization and muscular military exercises at a time when the U.S. should be doing all it can to build trust ahead of the planned summit. In particular, national security adviser John Bolton, who helped scuttle an earlier deal with North Korea while in the George W. Bush regime, must have known his inflammatory rhetoric would go over badly with North Korean leader Kim Jong-un. One needn’t be too cynical to ask whether his goal was to imperil the summit.”

Looking forward, Martin added, “Real diplomats, either within this administration or without, are urgently needed. Certainly, South Korean President Moon Jae-in will persist as an assertive mediator for peace and hopefully North and South Korea will continue their detente. President Trump’s letter to Kim cancelling the summit did leave the door open to talks at a later date, so this could be a short-term setback. However, there is a risk Trump cancelling the summit may squander the astonishing momentum for peace we’ve seen building since the beginning of the year.”

Martin also convenes the Korea Peace Network, which will have its Washington, DC Advocacy Days on Capitol Hill June 11-12, with over 60 peace, faith and Korean-American leaders focused on pressing Congress and the Administration to pursue peace on the Korean Peninsula.

Jon Rainwater, Executive Director of Peace Action, called for a course correction. “Only time will tell if this was a quick detour or a fateful u-turn to put us on a path to war. There is still time to get back to the diplomatic path,” said Rainwater. “The Trump administration needs to be pushed back to the negotiating table. A summit can be part of that, but realistically only calm, sustained diplomacy can solve this issue. Members of Congress must push the administration to get disciplined and do the tough work of negotiation. Without that negotiation the voices in the administration that are hungry for regime change and war could carry the day.” 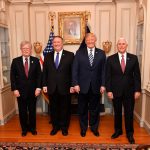 Between the Lines – With Trump’s New War Cabinet in Place, Danger of U.S. Conflict with Iran RisesIn the News 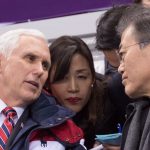 Counterpunch – The Libya Model: It’s Not Always All About TrumpOp-Ed