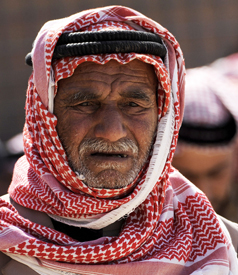 An Iraqi man waits in line outside a government headquarters building for food supplies from a humanitarian-aid delivery in northern Iraq. (Photo: DVIDSHUB / Flickr)

On April 9, 2003, exactly seven years ago, Baghdad fell under the US-led occupation. Baghdad did not fall in 21 days, though; it fell after 13 years of wars, bombings and economic sanctions. Millions of Iraqis, including myself, watched our country die slowly before our eyes in those 13 years. So, when the invasion started in March of 2003, everyone knew it was the straw that would break the camel’s back.

I still remember the day of the fall of Baghdad very clearly, as if it happened yesterday. My family and I had fled to my uncle’s home in southern Baghdad because our neighborhood, located near Baghdad’s airport, was bombarded by US airplanes in the days before. I remember the first US tank rolling down the street with a US soldier, wearing black gloves, waving his hand and some people waving back. That was one of the sadist day of my life, not only because Baghdad fell under a foreign occupation, but also because I knew it would be the beginning of another disastrous chapter in Iraq’s history. Now, when I look back at all that happened under the occupation, I find that I was, unfortunately, right.

Read the full article at TruthOut.

Laura Flanders sits down with Raed Jarrar to talk about the recent WikiLeaks videoIraq
Raed Jarrar talks with Dr. James Zogby of ViewpointIraq