From the World Conference in Nagasaki: For a Nuclear Weapon-Free, Peaceful and Just World 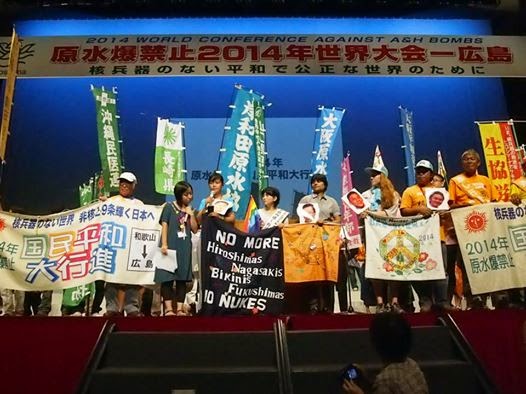 Note: On the 69th anniversary of the atomic bombings of Hiroshima and Nagasaki, Gensuikyo and other partners in Japan convened the 2014 World Conference against Atomic and Hydrogen Bombs  in Hiroshima and Nagasaki from August 2 to 9, under the theme: “For a Nuclear Weapon-free, Peaceful and Just World”. Gensuikyo is one of the international and US organizations  we will partner with to organize  an international conference and march at the time of the United Nation’s 2015 Non-Proliferation Treaty Review Conference in NYC.

Konichiwa.  My name is Sally Jones from Peace Action USA.  I am from our New York affiliate and will be one of your hosts for the 2015 NPT.  Thank you to the Women’s Peace Fund, Shinfujin, Gensuikyo and everyone who helped make my first trip to Japan the experience of a lifetime.  It has been a wrenching experience to be here at ground zero of the A-bomb attacks.  With the crisis in Ukraine and the military build-up in Asia, we are living in dangerous times.  But it is also inspirational to be at the epicenter of the No Nukes! No War! Movement.

What I heard from activists from all over Japan at the conference in Hiroshima is that we need to make this movement a broader, consensus building movement, not just here in Japan but globally.  Anti-nuke activists here in Japan are showing us how.

The anti-nuke movement here has the spirit of the civil rights movement of the 1950’s and 1960’s in the USA and you have even adopted its theme song:  We Shall Overcome.  The huge petition drive movement going on right now has resurrected some of the techniques of the 1980’s nuclear freeze.  Shinfujin is connecting to women by making the nuclear abolition movement a women’s movement.  It is connecting to youth by making this a youth movement.  It is connecting to people of faith by making this a spiritual movement.  It is seeking the endorsement of celebrities and putting their faces on flyers.  It is asking parents and grandparents to take their youngsters to peace walks and festivals and making the work creative and inspiring.  Japan’s movement is telling the world the compelling stories of the hibakusha with testimony and exhibits and it  connects their plight to the plight of the many victims in other countries who suffer because of nuclear accidents and testing.

Being a broad consensus building movement does not mean we are compromising our ideals of justice and equality. The Japanese No Nukes! Movement stands in solidarity with the Marshall Islands and their lawsuits against the U.S. and the nuclear weapons states.  It goes to Okinawa to help the struggle against US military base expansion.  You support the peace and justice movements from other countries – which is reflected in the international delegation you brought to this conference – from Korea, Guam, the Philippines, Vietnam, Nepal, India, Indonesia, Cuba, Malaysia, Portugal, France, Norway, the United Kingdom and the US and Russia.

As we approach the all important year of 2015 with the NPT Review happening on the 70 anniversary of the A-bombing of Hiroshima and Nagasaki, we will be taking this broader, consensus-building movement to NYC.  In our planning of activities for NY, let us use the spirit of the Japanese Anti-Nuke movement and apply them to the streets of NY.

This is what I’ve heard from activists at this conference so far:

Let the women, families, youth, and persons of faith who are in our movement create their own actions so that every person who cares about our issues will want to be there with us – and make it clear that we are there for their issues, too.  Some of the ideas I’ve heard is a Tea Party in Central Park, a Youth Peace Walk, and perhaps even a Children’s March. Political and celebrity endorsements aren’t a bad idea, either.

Let the world be involved by choosing a global action at an agreed upon hour in every time zone around the globe.

And, finally, bring the heart and soul of the No Nukes! Movement to NYC in the form of the Japanese delegations from every prefecture, every group, with their hundreds of thousands of signatures, exhibitions and stories of the hibakusha and let them spread that spirit as far and high as possible.

With the creativity of activists from all over the globe, let us go to NY and breakdown the stone walls of the nuclear weapons states’ intransigence, nuclear deterrence, militarism and injustice.