As we’ve reported on the unfolding battle in Congress over the fate of the nuclear deal with Iran, we have taken note of wave after wave after massive tidal wave of attack ads designed to strike fear into the hearts of voters, and transitively their Representatives, who would dare support the nuclear deal with Iran. But despite this well-financed campaign to destroy our best hope for containing Iran’s nuclear program, momentum in support of the agreement continues to build in Congress.

Horrified as we may be that the choice between war and peace will come down to a handful of moderate Democrats, there is cause for hope. Since the agreement was announced, 34 House Democrats as well as 16 Democratic and two Independent Senators have publicly backed the accord. In sharp contrast, only 9 House Democrats and one Democratic Senator (#WarmongerChuck Schumer) have come out against the deal.

Given the tens of millions of dollars spent on ad buys targeting democratic swing votes, how could it be that so few Democrats have come out against the deal? Perhaps the facts of the deal and the grim alternatives should it fail are giving pause to Democrats who would have otherwise succumbed to pressure from the anti-diplomacy coalition. But in politics, the facts and the down-the-road consequences of important decisions rarely outweigh the political calculus of reelection campaigns, so mustn’t there be something else at work?

Indeed there is, and that’s the power of the grassroots and a core of American voters that are pro-peace. Ordinary citizens dedicated to making a more peaceful world have been making the difference in this fight since the beginning. In 2014, thousands of activists called their representatives to urge them to reject a sanctions bill that would have derailed the negotiations.  In May, grassroots pressure was responsible for recruiting many of the signers of the Schakowsky letter that increased the chances of a final accord and the chances of its eventual enactment. Since the deal was announced in July, 436,329 people and counting have signed a petition  to their representatives that reads, “Republicans are trying to take us to war by sabotaging the Iran nuclear deal. I urge you to support the deal and stop the Republicans from starting another war of choice in the Middle East.”

Peace Action has joined in coalition to support the Iran Deal with other grassroots groups including  MoveOn, Credo, Daily Kos, Democracy for America, NIAC Action, and Win Without War in an effort we’re calling 60 Days to Stop a War. We’re organizing in the districts of the swing members of Congress who will determine how the votes on the Iran deal go. We’re lobbying, bird-dogging the candidates and delivering petitions. In Town Halls across the country, like this weekend’s Town Hall with Eric Swalwell (D-CA) seen below, representatives are hearing from their constituents that this deal makes America, our allies, and the world a safer place.

Click here or on the photo to watch a quick video of an eloquent constituent (and local Jewish leader) speaking out in support of diplomacy: 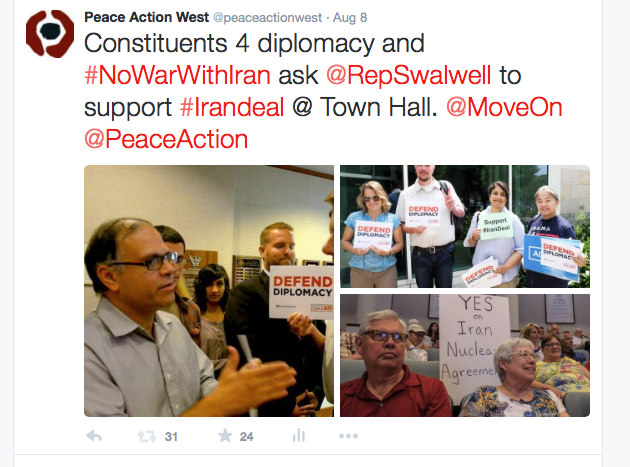 Meanwhile, those who have come out against the agreement, and particularly Senator Chuck Schumer (D-NY) who is one of the most influential votes on the deal, are feeling the wrath of the anti-war wing of the Democratic Party. 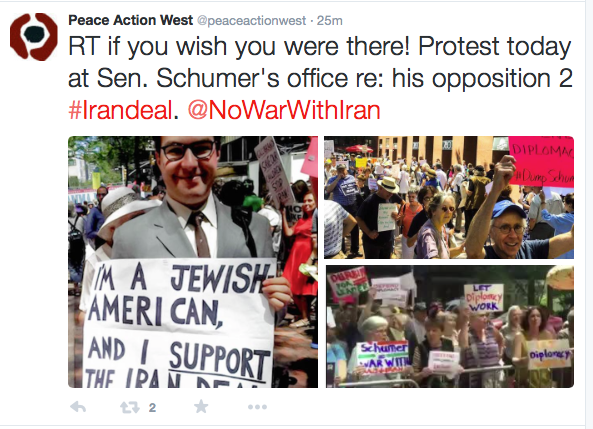 While momentum is clearly on the side of diplomacy, the battle in Congress is far from over. There are still far too many undecided Senators and Representatives who could yet sink this agreement and put us on the path to war, and your voice – yes yours – will make a difference in this fight.

You can join in with these efforts locally at the 60 Days to Stop a War website. If your reps have already announced their position, thank them if they support the agreement and give them an earful if they do not.