“By tapping Mike Pompeo to be Secretary of State, Trump is handing over the reigns of U.S. diplomacy to one of the most hawkish members of his administration. For all of Tillerson’s flaws, he served as a check on Trump’s more hawkish positions. With Pompeo, Trump’s worst instincts on Iran and North Korea will be reinforced. Pompeo’s not only said  his goal is ‘rolling back’ the ‘disastrous’ Iran nuclear deal, he earlier suggested military strikes as an alternative to diplomacy.

“In 2014, as part of his efforts to block President Obama’s diplomacy, Pompeo promoted a military approach. Pompeo made clear that he preferred military strikes to the diplomatic efforts that had already resulted in an interim agreement saying ‘In an unclassified setting, it is under 2,000 sorties to destroy the Iranian nuclear capacity. This is not an insurmountable task for the coalition forces.’

“North Korea is likely the most high stakes diplomatic issue facing the U.S., but Pompeo’s approach to North Korea is far from diplomatic. Pompeo recently said that ‘there will be no concessions made’ during negotiations. Pompeo has also signaled his interest in a policy of regime change in North Korea. Threatening regime change while ruling out the normal give-and-take nature of negotiations is a surefire strategy to kill the otherwise promising diplomatic progress on the Korean Peninsula in its crib.

“Secretary Tillerson presided over a shameful erosion of the diplomatic capacity of the United States. Critical positions remain vacant and morale among those left at the State Department is as low as ever. While Pompeo could end up being a more competent administrator, his extreme policy views threaten to gut U.S. diplomatic capacity further by making war the go-to option rather than a last resort.” 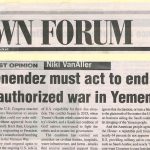 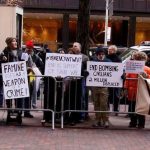