“Yesterday, Donald Trump unilaterally and recklessly launched a military action in Syria with no apparent plan for what comes next and with no legal authorization. This is not leadership and it will not make our country safer nor end the tragic human suffering in Syria.

“Make no mistake, this was an illegal act of war, launched in violation of the U.S. Constitution and international law. Congress should immediately cancel its planned recess and debate and vote before any further military engagement by Donald Trump in Syria.

“Our organizations recently committed to resist Donald Trump and his dramatic escalation of American war in the Middle East, and today we reaffirm that commitment.

“Trump cannot bomb his way to peace. If he were truly concerned about the human suffering in Syria, rather than sending a few dozen bombs, he would be leading the world in a diplomatic effort to end the war, increasing American support for humanitarian assistance, and welcoming Syrian refugees to the safety of America.” 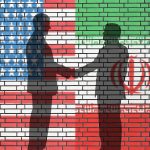 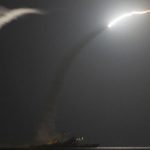 Between the Lines – Trump’s Syria Missile Strike: Symbolic Show of Force or Prelude to Wider U.S. War?In the News