“This looks like a response to criticism President Trump has faced for repeatedly overstating diplomatic progress with North Korea, but sustained negotiations are exactly what’s needed to work through the impasse and secure more significant progress. The fact that the Trump administration has issues with how North Korea is handling negotiations is a reason to continue talking, not a reason to kick the can farther down the road. The zig-zag of making a smart announcement yesterday of a new Special Representative to North Korea, then cancelling next week’s meetings only puts more chaos in a situation that needs stability.” 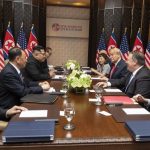