Following initial results of the 2018 midterm elections, Paul Kawika Martin, Peace Action’s PAC Director and Senior Director for Policy and Political Affairs, commented, “Peace Action went all out in this election cycle to support pro-peace candidates for Congress; sending out experienced organizers to work on campaigns, bundling and donating directly to campaigns, phone banking, recruiting volunteers, and shouting our support from the rooftops. As most results are in, it’s clear that many incoming members of the House are strongly pro-peace.”

“Our endorsed candidates for Congress ran unabashedly pro-peace campaigns, supporting diplomacy and a fully funded State Department, highlighting the need for Congress to reclaim its authority to debate and vote on war, and backing spending priorities that invest in our communities instead of arms industry profits,” Martin continued. “Peace Action’s candidates took principled stands in support of maintaining our international commitments from the Paris Climate Accord to the Iran Nuclear Agreement, and against reckless militarism like U.S. support for the disastrous Saudi-led war in Yemen.”

Speaking to the potential implications of this election on congressional action on peace issues, Martin remarked, “As a grassroots lobbying and advocacy organization, we’re excited to welcome the 116th Congress into session this January knowing that the legislative body has moved closer to representing the American people’s desire for peace. The incoming members of Congress we supported will help shift the tide of American foreign policy away from reckless interventionism and towards the pro-diplomacy, pro-peace agenda so many Americans long for. Perhaps most importantly, they’re ready to fight to reclaim Congress’ war powers from an administration that’s grown accustomed to ignoring them. That could prove particularly important as the lame duck Congress prepares to vote on whether or not to end unauthorized U.S. military support for the Saudi-led war in Yemen. If this Congress fails to take action to end our illegal role in the humanitarian crisis in Yemen, the incoming Congress may move quickly to force votes on the issue again.”

Highlighting the pro-peace credentials of some of Peace Action’s endorsed candidates who won their races, Martin concluded:

“Mike Levin (D-CA-49) wants to hold Washington accountable to the American people, from fighting for campaign finance reform to free our political system from the corrupting influence of mega-donors and corporate interests, to ensuring the wars being fought in our name are debated and voted on by the people’s representatives in Congress.

“Rashida Tlaib (D-MI-13) is committed to defending our nation’s true interests, from her staunch opposition to dangerous and discriminatory policies like President Trump’s Muslim ban, to her support for legislation to ensure no president can launch a nuclear first strike without Congress.

“Ilhan Omar (D-MN-05) is a true believer in the pursuit of a planet free from the tyranny of nuclear weapons and in a foreign policy built on diligent diplomacy instead of reckless interventionism.

“Tom Malinowski (D-NJ-07) has an impressive career of defending our nation’s interests and fighting for human rights, and he has the experience, the passion, and the principles that will make him a formidable advocate for peace and human rights in Congress.

“Chrissy Houlahan (D-PA-06) is a strong advocate of using diplomacy to address international tension and conflict, whether seeking to end wars in the Middle East or to prevent wars with Iran and North Korea.” 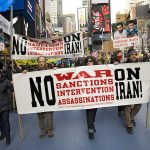 Trump’s Iran Sanctions Are Beating a Path to WarPress Statement 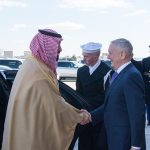