“For two and a half years, the U.S. has been fueling Yemen’s civil war with military support to Saudi Arabia for an intervention that was never debated or authorized by Congress. Most American taxpayers don’t realize they’ve been footing the bill for mid-air refuelings of Saudi coalition warplanes that regularly bomb civilian targets in Yemen. With U.S. support, the Saudi-led intervention in Yemen has helped give rise to one of the worst humanitarian catastrophes ever, and this resolution offers a chance to end that support.

“This privileged resolution will force members of Congress to go on record, many for the first time, on the question of whether or not we should be backing a coalition that’s demonstrated an intractable disregard for human rights and the most basic laws of war. To vote for continuing U.S. support is to vote for more indiscriminate bombings of schools, marketplaces, and hospitals in one of the world’s poorest nations, and at the expense of American taxpayers and U.S. national security interests. This is another push for Congress to take back its Constitutional authority to declare war, that for political expediency it has handed over to the President. Voters will be watching.” 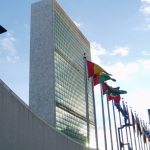 InDepthNews – U.N. Treaty Signing a Significant Step Towards a World Free of Nuclear WeaponsIn the News 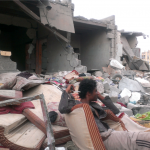