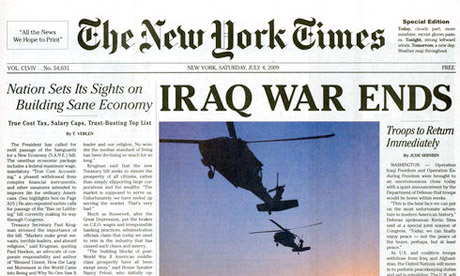 The US defence department today declared the end of the Iraq war and the immediate withdrawal of all troops, prompting an admission from Condoleezza Rice that the Bush administration had known all along that Saddam Hussein had no weapons of mass destruction, according to the New York Times.

On second thoughts, that introductory paragraph needs a little clarification. The New York Times proper didn’t report the end of the Iraq war. But a spoof 14-page “special edition” of the newspaper, circulating free in Manhattan yesterday, did carry those items. It was printed in a form that was so high quality that many New Yorkers were nonplussed, and was backed up by an entire website that equally faithfully mimicked the original.

Dated July 4 2009, and boasting the motto “All the news we hope to print” in a twist on the daily’s famous phrase “All the news that’s fit to print”, the fake paper looks forward to the day the war ends, and envisages a chain of events that would be manna from heaven for American liberals. In one story ExxonMobil is taken into public ownership, while in another evangelicals open the doors of their mega-churches to Iraqi refugees.

The organisers of the evidently expensive satire are connected at least to some degree to the Yes Men, a leftwing group that seeks to expose what it claims to be the “nastiness of powerful evildoers” through pranks. A spokesman for the New York Times spoof going by the name of Wilfred Sassoon said that the Yes Men had helped with distribution, but that the paper itself had been produced by a number of writers from various New York dailies, including a couple from the New York Times itself. The project had taken about six months and had been funded by a large number of small donors.

The New York Times said it was “in the process of finding out more” about its imitation.