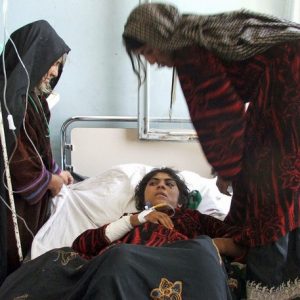 Wounded Afghan woman Safia (C), 27, lies on a bed at a hospital in the western Afghan city of Herat, on August 25, 2008 after she was allegedly injured in US-led air strikes in Azizabad village in Herat province. The Afghan cabinet demanded on August 25 the renegotiation of agreements regulating the presence of the international community in Afghanistan after more than 90 civilians were killed in US-led air strikes. The cabinet said the review should focus on the “limits of authority and responsibilities” of international troops and a halt on air strikes on civilians, illegal detentions and unilateral house searches, a statement said. AFP PHOTO/Reza SHIRMOHAMMADI (Photo credit should read REZA SHIRMOHAMMADI/AFP/Getty Images)