Prison at US base in Afghanistan a sore point among Afghans. 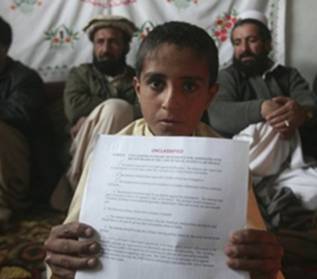 The son of Hafizullah Shahbaz Khiel, who has been held since last September at Bagram Air Base, Afghanistan, as a US prisoner, holds up papers declaring his innocence. (Photo: Rafiq Maqbool / AP)

Kabul – The word “Guantanamo” serves as shorthand among some Afghans for all the reasons they hate foreign troops, but the impending closing of the notorious prison has gotten surprisingly little attention in this country.

Nothing changed with last month’s U.S. presidential order to close Guantanamo, many people here say, because another prison inspires even greater fear: Bagram.

Even a man who could be expected to feel the most joy about Guantanamo closing, a former detainee who spent more than six years in the camp, quickly turns the conversation to the detention facility north of Kabul, inside the U.S. military base at Bagram.

“Everybody is happy because our friends will be released from Guantanamo, but there is a big question,” said Omar al-Madani, 30, who now lives in Kabul. “What will they do about Bagram?”

The answer was delivered late Friday, when a government lawyer told a Washington district court that President Barack Obama will continue the policy of his predecessor, forbidding detainees at Bagram from legally challenging their imprisonment in U.S. courts.

That policy will now be scrutinized in U.S. court, as advocacy groups try to persuade a judge that Bagram detainees should have the same rights as those in Guantanamo, including the right to a hearing before a neutral judge.

It’s an issue that will assume growing urgency in the coming months, as thousands of extra U.S. troops surge into Afghanistan and a $60-million expansion doubles the capacity of the Bagram Theatre Internment Facility, known by its acronym BTIF.

“It’s silly to think closing Guantanamo as a symbolic gesture will achieve legitimacy for the new administration, while the same practices continue at Bagram,” said Tina M. Foster, executive director of the International Justice Network, a New York-based rights group.

Her group has been representing Bagram detainees in court since 2006, but she feels the question of their rights has gained momentum in recent weeks.

In many ways, the detainees held in Afghanistan represent a bigger issue than those kept at Guantanamo Bay, Cuba. The estimated 600 prisoners at Bagram outnumber the 240 remaining in Guantanamo, and those held at Bagram have not enjoyed the same attention from lawyers and journalists who have spent years focusing on Guantanamo detainees.

As one of the first detainees at Guantanamo, Mr. al-Madani said he watched conditions slowly improve inside the camp as his captors reacted to the pressure from outside. Prisoners were beaten at first, he said, and the only amenities in his cage were two buckets: one for water, the other a makeshift toilet. But he spent the later years of his incarceration in greater comfort, allowed to read books and play soccer.

“The world’s eyes were on Guantanamo,” he said. “We got lawyers; things got better. But those people at Bagram have nothing, no lawyers, no courts. It’s a closed place, much worse.”

The Bagram prison is operated by the U.S. military and detainees have no right to legal counsel or fair trial. Most of the detainees are Afghans, but some were transported to Bagram from other countries. A military review board re-examines their status every six months.

A United Nations report last week singled out the Bagram facility for criticism. While the Red Cross was allowed to visit detainees, the report said, the Red Cross findings are kept secret and the U.S. military has denied UN requests for similar visits.

“There are reports that some persons have been in detention at Bagram for as long as five years,” the report says. “Some ex-detainees allege being subjected to severe torture, even sexual abuse. Ex-detainees also allege that they were held in cages containing between 15 to 20 men and that two detainees died in questionable circumstances while in custody.”

One of the few Afghan officials allowed inside the Bagram facility is Mohammed Akram Mirhazar, administrative director of the National Reconciliation Program, a government office that handles prisoners as they’re released back into society.

He said most of the detainees complain of torture, but Bagram serves a necessary function in the war. Corrupt officials at Afghan jails allow prisoners to slip free, he said, but nobody escapes from U.S. custody.

Despite the hundreds released so far, Mr. Mirhazar said only eight have been re-captured – and three of those were later re-released as authorities realized they had been wrongly imprisoned twice.

While acknowledging that his records may be incomplete, the Afghan official suggested the numbers show a high percentage of people swept up in military operations are innocent. This feeds anger among the local population, he said, and gives a propaganda victory to the insurgents.

“You must not give meat to your enemies,” he said.