Bringing the message back from Japan 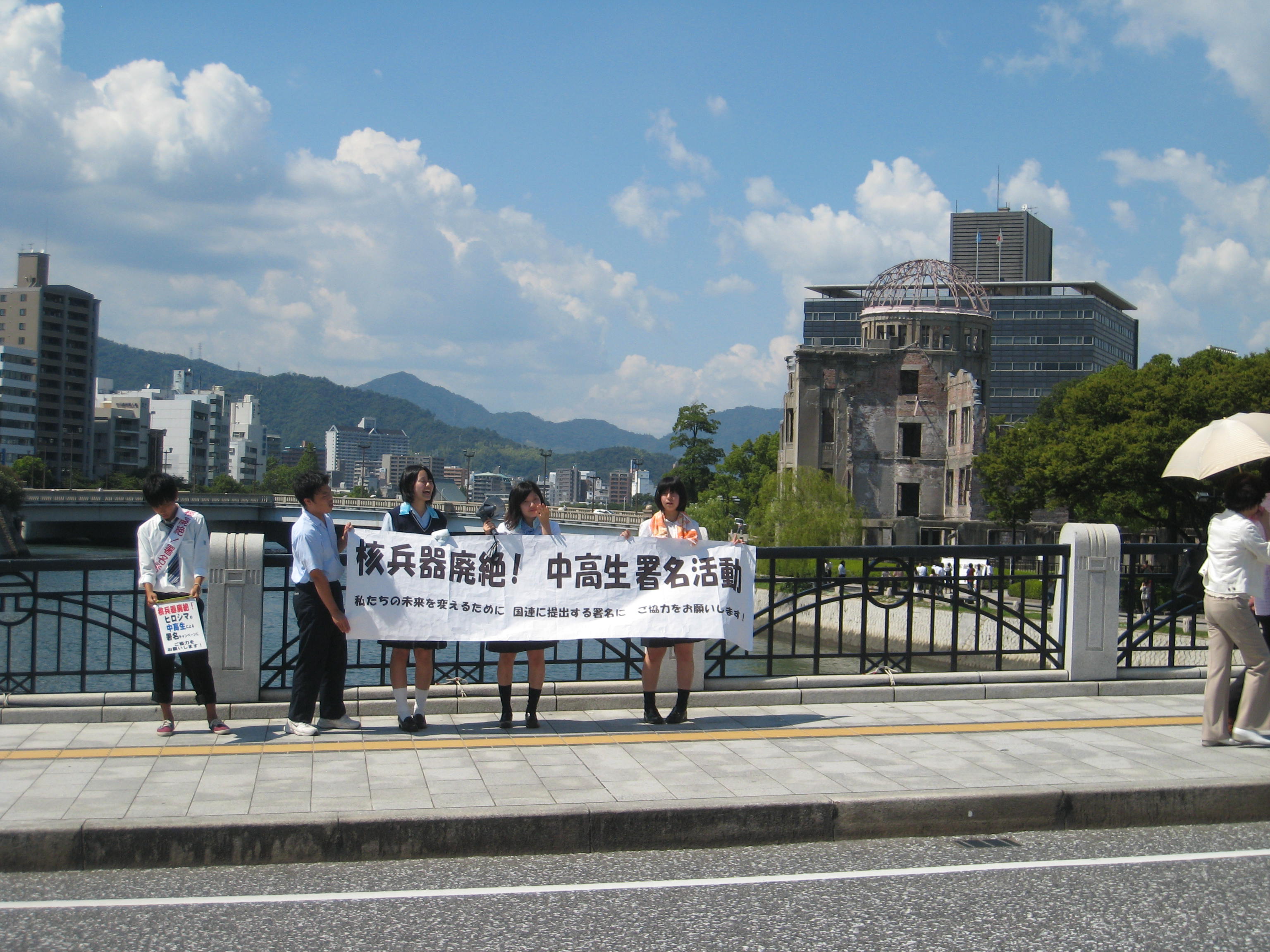 (Note: Alicia represented Peace Action at the Gensuikin Conference in Hiroshima/Nagasaki,August 3-9,
and also made a trip to view the U.S. bases in Okinawa and meet with peace activists.)

The rest of the trip in Japan was so packed and busy, I barely had time to sleep let alone write, so this blog is coming to you from Brooklyn – tired, but grateful for what I’ve seen and learned.

My last post was about Hiroshima, but I left out something very important – on our way to the
opening ceremony for the Gensuikin conference we passed several groups of high school students who
were out collecting signatures for a petition against the use of nuclear weapons.

My translator Yasu told me that although school is out for the summer, students in Hiroshima have to attend peace education on August 6, the anniversary of the atomic bombing of their city. The importance of peace education is something the Japanese delegation brings up every year in the United Nations during the meetings of the General Assembly’s First Committee (the disarmament committee), and it is something we in Peace Action NYS have talked about.

At our regional retreat last month in New Hampshire, we also discussed the importance of peace education for young people, and I think this is an extremely important issue. I was lucky to have spoken to some high school students in Brooklyn in May about
the wars in Afghanistan and Iraq and have been invited back by their teacher for next year – I think I will talk about peace with the students next time.

In Nagasaki the workshop on nuclear energy that I participated in was even larger than in Hiroshima, and at both places there were excellent discussions with the audience about the safety and future of nuclear power in the world and in the United States. Fukushima is still creating environmental and humanitarian disasters in Japan, and the audience was interested to learn about the anti-nuclear
power movement in New York and the greater U.S. Again, recent U.S. sub-critical nuclear experiments were discussed, as was the need for the swift entry into force of the Comprehensive Test Ban Treaty.

The commemoration of the atomic bombing in Nagasaki on August 9 we attended was smaller than the one in Hiroshima, but that was because several were taking place throughout the city instead of one big ceremony. Ours was at the hypocenter, above which the atomic bomb detonated 66 years earlier, and again it was a powerful and emotional moment. In Hiroshima people talked of it being the first city where an atomic bomb was exploded and that was unbelievably sad; in Nagasaki people spoke of the necessity for it to be the last place an atomic bomb is ever used, which in some ways was even more powerful of a message. The atomic bomb museum there did not spare you from personal and gruesome stories of radiation effects on people, which only reinforced the idea that such a horrible event can never be allowed to happen again.

The trip took an entirely different turn when we flew south to the island of Okinawa, home of many U.S. military bases and a culture that is distinct from that of mainland Japan. At this point I was the only foreign guest with the conference, and I was asked last minute to speak a few times about the U.S. military presence there. I was able to travel throughout the island and meet local peace activists engaged in 24/7 sit-ins to prevent the U.S. from building new heliports in the northern forests and who were protesting the noise pollution from existing U.S. bases that are located on top of civilian neighborhoods.

I promised the activists there that I would take their message back to the peace activists in the U.S. – that the U.S. is seen more like an occupier than an ally in Okinawa and the people of Okinawa do not want any U.S. military bases on their island, let alone any expansion of them. In my brief speech to a rally outside Futenma Air Base, near where a Marine helicopter crashed 7 years ago into
the local university, I said our peace movements need to work together, with the Okinawan peace activists continuing to protest so that our military and government can no longer use the excuse that the people of Japan want our military there to protect them, and our peace movement in the U.S. will use the budget crisis at home to try and prevent the continuing spread of U.S. military bases
abroad (as well as at home).

I think the thing that will stick with me the most from the first part of the trip is the human face of the very abstract idea of the effects of nuclear weapons, and how this has to inspire all of us to keep going with our anti-nuclear weapon work despite the heavy challenges it faces.

From Okinawa, I think I will be left with the sour taste of seeing with my own eyes how the U.S. has basically taken over that beautiful island without regard for the people or environment there, and the awful feeling that left in me as an American who loves all the amazing things about my country, but knows we are falling short of our own ideals in so many places.

A big thank you to everyone at the Peace Action national office for allowing me to have this incredible experience, and to everyone in New York who kept things going in the NYC office while I was away.