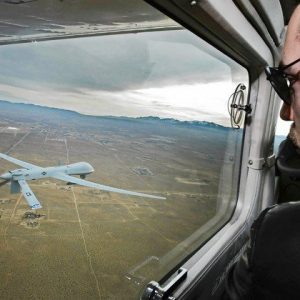 Bartletti, Don –– – JANUARY 9, 2010. VICTORVILLE, CA. Pilot Mark Bernhardt keeps an eye a Predator unmanned drone from his chase plane as they fly over Victorville, CA, on January 9, 2010. A ground crew from U.S. Air Force 163d Reconnaissance Wing of the California National Guard is flying the unmanned aircraft and the chase plane is used for safety reasons while it’s over civilian areas. (Don Bartletti / Los Angeles Times)