Time for the "zero option" in Afghanistan? 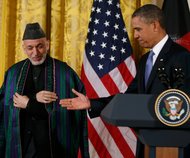 Reality seems to be setting in at the White House, with President Obama reportedly considering removing all troops from Afghanistan in 2014 rather than leaving a residual force.

Increasingly frustrated by his dealings with President Hamid Karzai, President Obama is giving serious consideration to speeding up the withdrawal of United States forces from Afghanistan and to a “zero option” that would leave no American troops there after next year, according to American and European officials.

Mr. Obama is committed to ending America’s military involvement in Afghanistan by the end of 2014, and Obama administration officials have been negotiating with Afghan officials about leaving a small “residual force” behind. But his relationship with Mr. Karzai has been slowly unraveling, and reached a new low after an effort last month by the United States to begin peace talks with the Taliban in Qatar.

As we did with the Iraq war, we have been pushing against the idea of keeping any troops on the ground after the so-called “combat troops” withdraw. It’s encouraging to hear these reports, the first indication that the president is seriously considering a full withdrawal. He will certainly find support in Congress–62 senators and 305 representatives have voted to support accelerated withdrawal, and that number is only likely to grow.
Karzai, Obama, troops, War, withdrawal