Update on Senate Panel Vote: Today is a good day to tell the Senate, "No More War!" 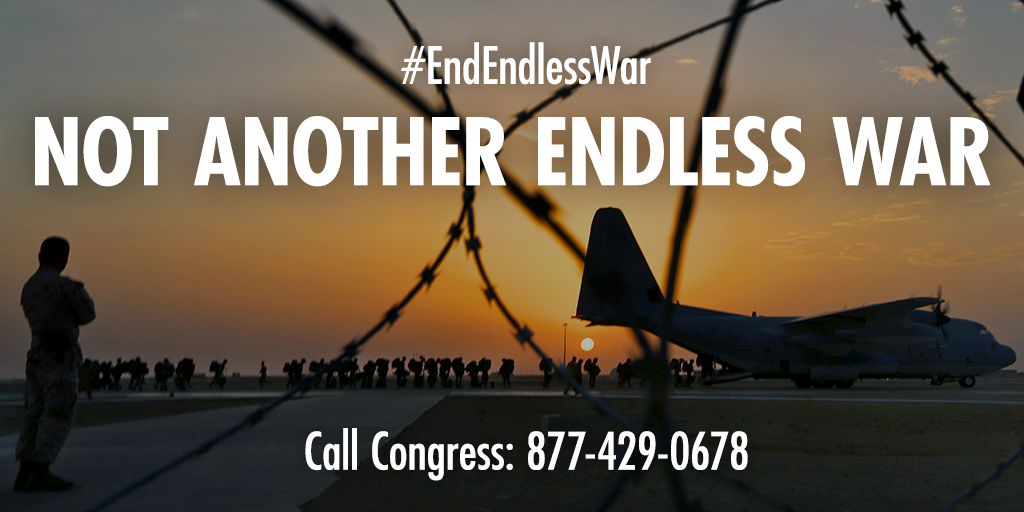 UPDATE DECEMBER 11: The Senate Foreign Relations Committee voted 10-8 in favor of the AUMF for Syria and Iraq, but with some limitations, read more in this article in Stars and Stripes. The importance of this vote remains to be seen, as neither the full Senate or House plans to take up the AUMF issue before the end of the year, so this committee vote will “expire,” and the new Congress may not take up the AUMF until March or April. Peace Action will of course keep you apprised of the situation and how you can make an impact.

Tomorrow, the Senate Foreign Relations Committee is set to vote on an Authorization for the Use of Military Force (AUMF) against ISIS in Iraq and Syria. The vote is somewhat symbolic, as it’s just a committee vote, and the full Senate and House will not vote on any AUMF before the new Congress convenes in January, meaning they would need to start from scratch on this issue.

However, the vote could be an indicator of the depth of support, at least in this important committee, for yet another endless war in the Middle East. The Obama Administration apparently wants at least a three year authorization (stretching beyond the end of the president’s term in office), with no geographic limitations, and no prohibition on deploying U.S. ground troops. Sure looks like a slippery slope to another endless war.

I need you to call your senators today, especially those on the Foreign Relations Committee (check the committee roster here http://en.wikipedia.org/wiki/United_States_Senate_Committee_on_Foreign_Relations)

Regardless of whether you have a senator on the committee, it’s a good day to tell the Senate, “No More War!” Thanks to our colleagues at the Friends Committee on National Legislation, you can call toll-free at 877-429-0678.

Today is International Human Rights Day, and we at Peace Action certainly believe peace is a fundamental human right. Please call your senators today, toll free at 877-429-0678, on behalf of peace and stopping yet another endless war.

P.S. For years Peace Action has advocated the repeal of both war authorizations for Afghanistan and Iraq, passed well over a decade ago. While we opposed both authorizations at the time, many who supported them then now agree that they are outdated and far too broad and should be repealed (we agree).

The Obama administration has been leaning on both authorizations for its military intervention in Iraq and Syria, though now it wants Congress to pass a new AUMF. We oppose a new AUMF as Peace Action thinks not enough energy has been spent on a political solution to the Syrian civil war and on starving ISIS of resources (oil, antiquities and sex trade revenue, weapons and foreign fighters).

Please call your senators today, toll-free at 877-429-0678, and thank you for all your support as we observe this season of peace.