US Economic Policy is Bringing Famine to 23 Million Afghans

Without urgent humanitarian support and international cooperation, one million children are predicted to starve this year in Afghanistan. Ever since America’s withdrawal of troops from the country, humanitarian partners have been “racing against time to deliver aid and supplies’’ to half of the country’s population that now requires humanitarian assistance to survive. According to UN estimates, ninety-seven percent of Afghans are living below the World Bank-designated international poverty line of $1.90 a day. Both the UN and several humanitarian agencies such as the International Red Cross have said that the main drivers of this crisis are U.S. and allied economic policies: namely sanctions and asset freezes. The UN says it is the worst economic shock to a country they’ve ever seen.

Infant mortality is the highest it’s been in 20 years and Covid spread places additional pressure on weak health infrastructure. Amidst further development of Covid variants, the need for freely moving medical goods across the country supports the notion that this is a fast-moving disaster that requires strategy adjustment based on facts on the ground.

After 20 years of war in Afghanistan, Peace Action welcomed the withdrawal of troops from the country. Post-withdrawal healing in an aid-dependent country, we understood, would require sustained grassroots humanitarian support to support a new self-sustaining economy.

Instead, as the Taliban took control of Kabul, Afghanistan saw its resources suddenly cut and suspended by the international community. The Biden administration froze $9.5 billion in Afghanistan Central Bank accounts, which choked off the liquidity the Afghan economy needs to function. Now, doctors, nurses, teachers and other essential government workers haven’t been paid in months. US foreign policy must change now.

This heavy-handed economic sanctions policy severely penalizes Afghans and the entire Afghan economy. Taking the Afghan economy hostage to express U.S. disapproval of the Taliban is counterproductive. Instead, the US can take direct, consistent humanitarian action to begin to heal the damage done during the war.

If the Problem is US Policy: You and I Can Solve it By Forcing a Change in that Policy

Starting now, we can all pressure members of Congress to call on the administration to unfreeze the frozen funds, relax sanctions, and increase humanitarian aid. All you need to do is dial the Congressional switchboard at 202-224-3121. Call or write and ask your senator to support an effort led by Senator Jeff Merkley (D-OR) that calls for key changes to Biden administration policy including 1) relaxing U.S. sanctions that are making it harder for humanitarian aid to get through 2) unfreezing the assets that Afghanistan needs to keep its economy functioning and 3) increasing humanitarian aid.

The extent of this crisis calls for a National Day of Action. Led by Peace Action and human rights groups allies, Love to Afghanistan vigils will take place across the nation from February 12-14. Get involved – you can register your Love to Afghanistan event/vigil here. Access our toolkit to make your vigil successful.

In December, over 40 Members of Congress signed a letter calling on the Biden administration to unfreeze $9.5 billion in Afghanistan Central Bank accounts in the US, an order which aimed to put pressure on the Taliban but which unfairly hurts Afghanistan’s economy on a local level. The Taliban is brutal and oppressive, but destroying the entire nation’s economy makes every Afghan citizen more vulnerable and unable to rise up against the new leadership. Noting the situation’s urgency, Chair of the Progressive Caucus Pramilla Jayapal said,

“Our focus now must be on the human beings on the receiving end of this policy. We must increase humanitarian aid to support civilians who fled to Kabul and provincial capitals and are without shelter, food, medical assistance or vaccines. The heartbreaking situation confronting ordinary Afghans after 20 years of American war requires us to act as quickly as we can.’’ 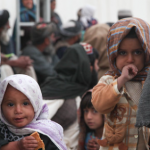 What We Must Do For AfghanistanAfghanistan, children 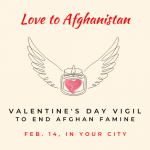