This is a guest post from Martin Hellman that was originally published today on his the Defusing the Nuclear Threat blog.

Today’s news that Turkish fighters shot down a Russian jet near the Syrian border, is unlikely to lead to a nuclear crisis …  but there is a chance that it could. If Russia had shot down one of the Turkish planes – or were to do so in a future such encounter to prevent more of its pilots being killed – we would be bound by Article 5 of the NATO Treaty to treat it the same as an attack on one of our own aircraft. Yet the word nuclear appeared nowhere in any of the coverage I saw: Reuters, CNN, the Wall Street Journal, USA Today, the Telegraph, and the Guardian, and Yahoo News.

If we keep ignoring that risk, eventually one of these provocative incidents will blow up in our faces. The time to recognize that danger and to start work on reducing the risk is now, not once a crisis exists. Neither Kennedy nor Khrushchev wanted to teeter on the nuclear abyss in October 1962 during the Cuban Missile Crisis. But both nations ignoring risks that should have been evident caused exactly that to happen.

If Syria, or Ukraine, or the Senkakus, or one of the other global hot spots should escalate to a full-blown crisis, we can hope that it will end like 1962’s Cuban crisis, without the use of nuclear weapons. But, given how often such events occur and the horrendous consequences of a nuclear war, counting on a positive outcome would seem to constitute gross negligence.

New Push in Congress to Vote on Iraq/Syria WarSyria 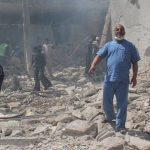