Op-Ed in The Daily Reflector, Greenville NC – President Obama should visit Hiroshima, but not empty-handed

Secretary of State John Kerry’s recent visit to Hiroshima’s ground zero, where the U.S. dropped the first atomic bomb nearly 71 years ago, was laudable. Kerry is the highest ranking U.S. official to visit Hiroshima’s Peace Park, and the event’s significance was enhanced by the presence of the other foreign ministers of the G-7 nations.

Clearly, Secretary Kerry was deeply moved, calling it “gut-wrenching” and saying “everyone” including his boss, President Barack Obama, should go there. While Kerry said he would tell the president this when he gets back to Washington, he refrained from publicly advocating the president go to Hiroshima next month when the G-7 economic summit convenes in Japan.

However, as there have been reports for some time that the president is considering going to Hiroshima, this certainly looks like a classic Washington trial balloon.

So should the president go? The answer, like with many issues, is “it depends.”

If the president and other heads of state plan to go as a symbolic gesture, they needn’t bother. Empty promises, especially from the nuclear weapons-possessing states, of someday perhaps ridding the world of the scourge of nuclear weapons would be unsatisfactory and even insulting to the people of Japan, and especially to the Hibakusha, atomic bomb survivors whose steadfast witness that no one ever again suffer as they did is awe-inspiring.

First, he should meet publicly with Hibakusha such as members of Nihon Hidankyo, a group nominated for the Nobel Peace Prize, to hear their personal stories and learn from their persistence, patience and sense of forgiveness.

And there couldn’t be a better audience, nor a better time for a president whose days in office are dwindling, for Obama to announce concrete steps toward the goal he enunciated in his Prague speech in 2009, the security of a world free of nuclear weapons. Steps he could announce in Hiroshima should include:

— announcing further nuclear reductions with Russia, as use of even a fraction of our combined current arsenals of approximately 14,000 warheads (over 90 percent of the world’s total) could cause nuclear winter, resulting in severe climate change leading to global famine;

The U.S. cannot on the one hand say it is for ridding the world of nuclear weapons while at the same time it proceeds with a scheme to spend this outrageous sum, which would be better invested in job creation, green energy production, education, affordable housing and infrastructure repair here at home. Predictably, every other nuclear weapons state has followed suit and announced plans for their own “nuclear modernization,” and this certainly shreds our credibility to preach continued abstinence to non-nuclear states from a nuclear barstool.

As someone who has visited Hiroshima three times on August 6, the anniversary of the atomic bombing, I can assure the president he would indeed be deeply moved by going to Peace Park. That’s not sufficient though, and the opportunity could be squandered if it’s made to be about him, or whether he is apologizing for the bombing 71 years ago, which would be a pointless debate.

President Bill Clinton, in his last year in office, wished he could go without sleep, as there was so much he wanted to do in his limited time left in the White House, and there was a “dog-ate-my-homework” frantic nature to much of what he proposed late in his second term, and much left undone when he left office. President Obama ought not to make the same mistake. The president should go to Hiroshima as the leader people expect him to be, and he envisions himself to be, on an issue of utmost urgency to humanity.

Kevin Martin writes for PeaceVoice and is executive director of Peace Action, a grass-roots peace and disarmament organization. 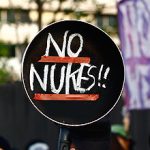