Secretary of Defense Ash Carter places his hand over his heart as the National Anthem is played during an honor cordon welcoming the Minister of Defense of Saudi Arabia Mohammad bin Salman Al Saud to the Pentagon for a meeting May 13, 2015. DoD Photo by Glenn Fawcett (Released)

As we previously reported, cluster bombs are banned by over 100 countries and for good reason:

By design, these weapons disperse bomblets over large areas, making their use over civilian areas particularly atrocious. They also leave unexploded bomblets strewn across those areas — functionally landmines — that civilians frequently stumble upon and accidentally detonate.

Saudi Arabia’s use of U.S.-made cluster bombs over civilian areas in Yemen have implicated the U.S. in what some say amount to war crimes.

In March, Peace Action cosponsored an event in Washington D.C. called the 2016 Summit on Saudi Arabia, which brought together hundreds of activists from across the country to discuss the more than problematic relationship between the U.S. and Saudi Arabia.

In April, Sens. Chris Murphy (D-CT) and Rand Paul (R-KY) introduced legislation that would block the transfer of all air-to-ground munitions to Saudi Arabia until the president certifies that Saudi Arabia is taking steps to avoid civilian casualties and facilitate the flow of humanitarian aid. Reps. Ted Lieu (D-CA) and Ted Yoho (R-FL) introduced a companion bill in the House, which picked up 5 new cosponsors this week.

Earlier this month, Reps. John Conyers (D-MI), Raul Grijalva (D-AZ), Keith Ellison (D-MN), and Jim McGovern (D-MA) introduced an amendment to the national defense authorization act (NDAA) that would have prevented funds from being used “to transfer or authorize the transfer of any cluster munitions to Saudi Arabia.” While the amendment was ultimately not given a vote, the White House seems to have gotten the message.

The administration was right to suspend transfers of cluster bombs to Saudi Arabia, but the change in policy was long overdue, and much more needs to change. The U.S. should sign onto The Convention on Cluster Munitions which bans the use of cluster bombs. In regards to Yemen, the U.S. should immediately end its military support for the Saudi-led coalition, end arms sales to all coalition members, and pressure all involved parties to negotiate a diplomatic solution in good faith. The administration and Congress both have the power to change our approach to the war in Yemen, and stopping the transfer of cluster bombs is only the beginning.

Click here to read Peace Action’s press release on the decision to suspend transfers of cluster bombs to Saudi Arabia. Follow Peace Action on Facebook and Twitter to get up to date coverage on issues of war and peace. 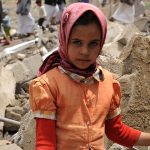