51 Diplomats, Two Think Tanks, and the Future of Syria

Last week, the New York Times published a leaked draft of an internal State Department memo signed by 51 U.S. diplomats (an unprecedented number) calling on President Obama to expand the U.S. military’s role in Syria. Without getting into too many specifics, it calls for launching “targeted military strikes” against the Assad regime and protecting and empowering “moderate Syrian opposition.” The memo was filed through a dissent channel that was set up during the Vietnam war so that officials could quietly challenge the administration’s approach to foreign policy without making it into a national story, and thus without the fear of alienating the powers that be. While the names of the signers were omitted from the leaked memo, shielding them from any accountability for their position, the leak certainly created a national story, and insodoing advanced a dangerous set of policy prescriptions for Syria that could make a terrible situation much worse.

While the authors of the memo admit that “the risk of further deterioration in U.S.-Russian relations is significant and that military steps to stop the Asad [sic] regime’s relentless bombardment of the Syrian people may yield a number of second-order effects,” they contend that those risks are outweighed by the need to protect the people of Syria, advance U.S. political interests, and reach a diplomatic solution to the conflict.

Peace Action is strongly opposed to U.S. airstrikes against the Assad regime. We also oppose all lethal military support for Syrian rebels, and more broadly, all U.S. military involvement in Syria, which Congress has not expressly authorized. Assad is a brutal dictator who has ordered unspeakable atrocities, but to facilitate his forcible removal from power without a political solution in place would create the same type of power vacuum that deposing Saddam Hussein and Muammar Gaddafi created in Iraq and Libya.

The authors of the memo attempted to preempt concerns about a power vacuum by explaining that their policies are designed to pressure Assad to negotiate rather than actually remove him from power. But they offer no assurances that what would start as a limited mission to protect civilians wouldn’t escalate into forcible regime change, as was the case in Libya. Thus the authors are quite right in stating that their proposed escalations could cause “second-order effects,” although they don’t spell out that those effects could include Syria falling more completely into the hands of extremist and terrorist groups including ISIS and Al Qaeda. They are also correct that their proposed escalations risk worsening an already tense relationship with Russia, which could very easily lead to military confrontation, a dangerous prospect indeed given the thousands of nuclear weapons our countries keep pointed at each other on hair-trigger alert.

The authors are dangerously wrong however in their assertion that military escalation would likely improve our position at the negotiating table. History has shown that military threats and escalations are far less effective in promoting peace than dialogue and cooperation. While Russia and Iran could certainly stand to put more pressure on Assad to negotiate in good faith, the U.S. could stand to put more pressure on Saudi Arabia and its proxies to do the same. Rather than inaction, as the authors suggest is the only alternative to escalation, the U.S. should more fully commit to the peace process and to non-military strategies to address the atrocities being committed by nearly every player in the Syrian Civil War.

Coincidentally – if you believe in that kind of thing – on June 16, the same day that the State Department memo was leaked, a foreign policy think tank headed by Michèle Flournoy (reportedly a top contender for Secretary of Defense should Clinton win the presidency) called the Center for a New American Security (CNAS) published a report titled “Defeating the Islamic State: A Bottom Up Approach.” Among other policy prescriptions, it calls for military escalation in Syria against the Assad regime. According to the report, the U.S. “should emphasize arming and training local groups that are acceptable to the United States regardless of whether they are fighting Syrian President Bashar al-Assad or ISIS,” and should “be willing to threaten and execute limited military strikes against the Assad regime.” Like the memo, it notes that “this approach comes with real risks,” such as “the danger of catastrophic success, where the groups put too much pressure on the Assad regime and cause it to collapse.” Like the memo, it also contends that those risks are acceptable.

On June 19, the Century Foundation, which identifies as a progressive think tank, published a report titled “The Case for a More Robust U.S. Intervention in Syria.” Among other proposals, it calls for the U.S. to increase “the CIA’s covert sponsorship of armed proxies and the Pentagon’s overt train-and-equip program for rebels,” and then casually suggests a major escalation in having the U.S. “shoot down some Syrian government planes and helicopters.” Don’t worry though, because according to the report, “limited military intervention is only a slippery slope if the United States fails to exercise discipline.” What a relief… Interestingly, Lewis Kaden, a trustee for the Century Foundation, is also on the board of directors at CNAS.

While the type of military escalation that Flournoy, CNAS, the Century Foundation, and 51 anonymous diplomats are proposing falls short of John McCain and Lindsey Graham’s calls for sending 10,000 U.S. troops into Syria, it still represents a distinctly different approach than Obama’s relatively restrained engagement in Syria. Given the risks involved – which the State Department memo, the CNAS report, and the Century Foundation report are all careful to acknowledge – these escalatory proposals could easily lead to even more escalation. As the New York Times Editorial Board pointedly asked in response to the memo, “what if the ‘limited’ airstrikes did not work?” Would these same people call for further escalation? And who benefits from more escalation when most of the international community is working hard to de-escalate the situation?

It’s no secret that the arms industry reaped huge financial rewards from the Iraq War, and had close ties to many of the top decision makers in the Bush administration. So it doesn’t come as a shock to learn that the board of advisors at CNAS includes a substantial list of people who stand to gain from U.S. military escalation in Syria, namely top executives from many of the largest arms manufacturers in the world. In fact, of the 20 largest arms manufacturers in the world (according to a 2015 list), 5 are represented on CNAS’ board of advisors, including Lockheed Martin, Raytheon, Airbus Group, Finmeccanica, and Huntington Ingalls Industries, ranked 1st, 4th, 7th, 9th, and 13th largest arms manufacturers respectively.

As much of the coverage surrounding the State Department memo speculated, it’s unlikely that the intention behind the memo and the leak was to pressure President Obama to change his Syria policy in the final months of his presidency. A more likely motivation would be to lay the groundwork for military escalation in Syria under a new president. Certainly the timing as well as the nearly-uniform policy prescriptions of the memo and the reports from CNAS and the Century Foundation raise the question of whether this is a concerted effort, perhaps even a carefully crafted campaign, to draw the U.S. further into a military approach that has failed to produce peace time and time again. 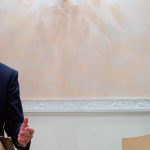 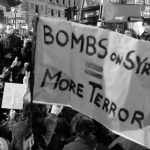