The Trump Theory on War

“This is the Trump theory on war,” he said referring to himself in third person. “But I’m good at war. I’ve had a lot of wars of my own. I’m really good at war. I love war in a certain way. But only when we win,” (emphasis added). These are the words of a man that Republicans just nominated for President of the United States. And as dangerous and damaging to our national security as Trump’s campaign rhetoric has been, his actual policy proposals are even more troubling.

Despite claiming to “know more about ISIS than the generals do,” Trump’s ideas for addressing the threat of terrorism are simply dangerous. In the early days of the presidential primary in the Spring of 2015, Trump made headlines for his secret plan to defeat ISIS. During an interview with Fox News, the host asked Trump if he had a specific plan for defeating ISIS. His response was, “I’m not going to tell you what it is tonight. I don’t want the enemy to know what I’m doing. All I can tell you is that it is a foolproof way of winning.”

A little over a month later, he confessed that his master plan was to defeat ISIS by attacking their oil. By the time Trump made this approach public, the strategy of bombing ISIS oil fields had already been deployed by the administration, and perhaps realizing this, Trump reframed the strategy as taking the oil, or in other words, bombing ISIS controlled oil fields and letting American oil companies move in to rebuild the infrastructure:

They have some [oil refineries] in Syria, some in Iraq. I would bomb the s— out of ’em. I would just bomb those suckers. That’s right. I’d blow up the pipes… I’d blow up every single inch. There would be nothing left. And you know what, you’ll get Exxon to come in there and in two months, you ever see these guys, how good they are, the great oil companies? They’ll rebuild that sucker, brand new — it’ll be beautiful.

Of course, this would require putting troops on the ground to protect the oil companies. It would also entail destroying our political relationship with the government of Iraq by stealing one of its most valuable commodities. It’s not hard to see how this approach, if actually put into practice, would undermine regional stability and ultimately benefit the very groups that this plan is supposed to disempower. But don’t worry, because “it’ll be beautiful.”

In December 2015, Trump put forward a ground breaking proposal to defeat terrorists: kill their families. “The other thing with the terrorists is you have to take out their families… They care about their lives, don’t kid yourself. When they say they don’t care about their lives, you have to take out their families.” While the U.S. is already killing civilians in Iraq and Syria with its bombing campaign, including at least 77 civilians in coalition airstrikes this week, changing U.S. policy to intentionally target civilians regardless of whether they’re related to terrorists is undoubtedly one of Trump’s most obscene proposals. Putting aside the strategic blunder that such a policy change would represent, not to mention to complete immorality of such a plan, making “take out their families” official U.S. policy would be a violation of the Geneva convention, which explicitly states, “The civilian population as such, as well as individual civilians, shall not be the object of attack.”

Less than a week after suggesting we target family members of terrorists, in response to the ISIS-linked attack in San Bernardino, Trump proposed banning all Muslim immigration to the U.S. until we “figure out what is going on.” Of all the conservative rhetoric and policy proposals that play into the narrative terrorist groups use to recruit fighters and inspire lone wolf attacks – the narrative that the West is at war with Islam – Trump’s Muslim ban proposal takes the cake. In fact, Al-Shabaab, an Al Qaeda affiliate, used a clip of Trump proposing the ban in a recruitment video less than a month after his speech. As damaging as the mere suggestion of a Muslim ban proved to be, turning the proposal into official U.S. policy would be far worse.

During a Republican debate in February, Trump said that he would not only bring back waterboarding, but he “would bring back a hell of alot worse than waterboarding.” Attempting to defend the indefensible during a phone interview with Wolf Blitzer, Trump rhetorically asked, “They can chop off heads and drown people in cages, heavy steel cages, and we can’t waterboard?” Like most of his ludicrous proposals for addressing terrorism, Trump’s ideas on torture are immoral, illegal, and strategically inadvisable. As Vice-President Biden put it, “Adopting the tactics of our enemies – using torture, threatening to kill innocent family members, indiscriminately bombing civilian populations – not only violates our values, it’s deeply, deeply damaging to our security.”

As sickening and dangerous as Trump’s approach to terrorism is, his approach to nuclear weapons is even more concerning. In March, during an interview with the New York Times, Maggie Haberman, one of the interviewers, referred to Trump’s stance that Japan and South Korea should pay for their own defenses and asked Trump if he would object to Japan developing its own nuclear arsenal in order to defend itself. After giving several non-answers and being pressed on the question, Trump said, “Well I think maybe it’s not so bad to have Japan — if Japan had that nuclear threat, I’m not sure that would be a bad thing for us.” Then in April, during a Republican town hall, Trump seemed to suggest that nonproliferation efforts were a waste of time, because proliferation is “going to happen anyway.” On his first point, he clearly failed to consider the fact that encouraging any country, ally or otherwise, to develop nuclear weapons would likely exacerbate an already dangerous nuclear arms race between the U.S., Russia, and China, significantly increasing the chance of nuclear war. On his second point, since dropping the first atomic bomb in 1945, the U.S has played a critical role in promoting nonproliferation, successfully convincing numerous countries to abandon their nuclear weapons programs, so the notion that nuclear proliferation can’t be helped has no basis in reality.

When it comes to one of the greatest diplomatic achievements and victories for nonproliferation in recent memory, the Iran Nuclear Agreement, Donald Trump has said he will “renegotiate” it.

When I am elected president, I will renegotiate with Iran — right after I enable the immediate release of our American prisoners and ask Congress to impose new sanctions that stop Iran from having the ability to sponsor terrorism around the world.

For starters, the notion that Iran and the P5+1 powers would be willing to renegotiate a deal that took years to reach is nothing short of absurd. Moreover, imposing new sanctions on Iran is among the most efficient ways to ensure that Iran walks away the agreement and never negotiates with the U.S. again, which is exactly why Republicans in Congress have never stopped working to pass new sanctions against Iran. Republicans have made it clear that they want this deal to fail, and that they much prefer starting another war in the Middle East. While Trump has said he hopes to prevent Iran from obtaining nuclear weapons without resorting to “direct action,” his plan for renegotiating the agreement would pave the way for a war with Iran. So much for Trump’s isolationism.

For many, the most terrifying prospect of a Trump presidency is his access to the nuclear codes. As Hillary Clinton put it, “This is not someone who should ever have the nuclear codes because it’s not hard to imagine Donald Trump leading us into a war just because somebody got under his very thin skin.” The truth is we’d all be safer if we abolished nuclear weapons and made sure that nobody has the ability to destroy all life on this planet. But as long as we have them, it makes a lot of sense to avoid entrusting them to a man who responds to criticism like a 5 year old.

Peace Action, along with much of the world, is deeply concerned by the prospect of a Trump presidency. Electing Donald Trump, a man who claims he’s “more militaristic than anybody in this room,” and says he “loves war in a certain way,” would be a profound and historic mistake. From bringing back waterboarding and worse, to renegotiating the Iran nuclear agreement, to promoting the spread of nuclear weapons, Trump’s foreign policy proposals are products of what he thinks the American people want to hear. This November, it’ll be up to us, the voters, to show him and the world how wrong he is. 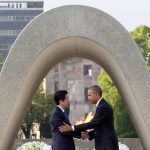 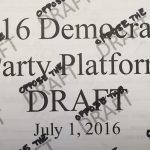