TAKE ACTION: Urge your senators to end U.S. support for war in Yemen

We have a very real opportunity to help end what the United Nations has deemed “the largest humanitarian crisis in the world.”

For nearly 3 years, the U.S. has supported a military coalition led by Saudi Arabia in a brutal war in Yemen. The impact has been devastating for Yemenis. The coalition’s airstrikes have killed thousands of civilians by indiscriminately bombing schools, hospitals, marketplaces, and other vital infrastructure.

Yesterday, Senator’s Bernie Sanders (I-VT) and Mike Lee (R-UT) introduced a bipartisan bill that would end U.S. involvement in Yemen’s civil war. Because their bill declares that the U.S. role in the war in Yemen violates the Constitution and the War Powers Resolution, it’s likely guaranteed a vote on the Senate floor within the next 10 days!

Please, take a quick moment and sign our petition to your senators urging them to support this crucial legislation.

After signing, you’ll be directed to a special tool to call your senators’ offices to urge them to support this crucial legislation.

Congress has never authorized U.S. involvement in Yemen’s civil war. Despite this fact, the U.S. has literally fueled the conflict and its resulting war crimes. The military support has included mid-air refueling of warplanes, participation in naval blockades, targeting assistance and more. On top of all that, the U.S. has also approved tens of billions of dollars in arms sales to members of the military coalition.

This reckless and unauthorized military support has to stop, and you can help make that happen.

First, click here to sign the petition calling on senators to support legislation that could end U.S. complicity in Yemen’s civil war.

After signing, call your senators offices to urge them to support S.J.Res 54 to end U.S. support for the war in Yemen.

The Saudi-led bombing campaign paired with ongoing blockades of Yemen’s borders and ports is choking the country’s access to food, fuel and desperately needed medical supplies. According to the U.N., nearly 22 million people in Yemen are in need of humanitarian aid. That’s about 75% of its entire population.

Even worse, around 8.4 million people, roughly the population size of New York City, are at the brink of starvation. Yemen is also now home of the largest and fastest growing cholera crisis ever documented, with over 1 million Yemenis having contracted this normally preventable disease. Every 10 minutes, a child in Yemen dies of malnutrition or preventable disease.

Last fall, 366 members of the House of Representatives voted for a bill acknowledging that Congress has not authorized U.S. involvement in Yemen’s civil war. Let’s build on that momentum.

Please, take a moment right now to urge your senators to support legislation that will bring an end to your tax dollars funding an unauthorized war in Yemen.

In a recent poll, 70.8% of Americans said they believe Congress should pass legislation to restrain oversees military action. Yemen should be at the very top of this list. 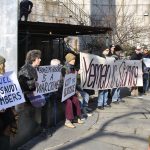 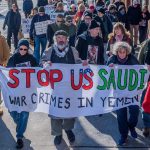