Despite Pleas From the World, Trump Looks Poised to Kill the Iran Deal

The Iran Nuclear Agreement has been in President Trump’s crosshairs since he announced his candidacy. Political motivations, rather than real policy concerns, have driven Trump’s disdain for the accord, which he’s decried as “insane,” “ridiculous” and “the worst deal ever negotiated.” With an important deadline for the president to waive certain sanctions suspended under the agreement quickly approaching on May 12, what he chooses to do could mean the difference between life and death for the young nuclear accord.

Yesterday, Israeli Prime Minister Benjamin Netanyahu, who has attacked the deal on numerous occasions, staged a theatrical unveiling of allegedly “secret” Iranian plans for a nuclear weapons program from 2003. Despite assurances from the International Atomic Energy Agency (IAEA), the United Nations nuclear watchdog, that no credible evidence exists of such research progressing beyond 2009, Netanyahu appeared to be suggesting that Iran is currently lying about the purpose of its nuclear program, though he offered no evidence of that. Whether or not Iran is lying about its intentions, however, is a moot point since the nuclear agreement is based entirely on verification rather than trust. Given the timing of Netanyahu’s theatrics, shortly following a meeting with Trump’s new Secretary of State Mike Pompeo, the move appears to be little more than an effort to give Trump political cover for withdrawing from the agreement without cause.

Signed in 2015, the Joint Comprehensive Plan of Action (JCPOA), as it is formally known, makes the U.S. and the world safer. For starters, it significantly lengthened Iran’s breakout time – the time it would take to produce enough material for one bomb. To ensure this, Iran shut down about two-thirds of its centrifuges; got rid of 98% of its enriched uranium; and agreed to the most extensive nuclear inspections regime in history. In addition to Iran and the United States, Germany, France, the United Kingdom, the European Union, Russia, and China are all signatories. These countries have repeatedly expressed their commitment to and support of the deal, citing its achievements and Iran’s continued compliance.

Not only has the IAEA confirmed Iran’s compliance with the agreement, so has the European Union, over 80 nuclear policy experts, over 100 national security veterans, and even Trump’s own State Department. Hundreds of European parliamentarians recently urged Congress to stay Trump’s hand – both because “Iran fulfils its obligations,” and because leaving “would diminish the value of all the promises and threats our countries make.” Key players in Trump’s administration seem to agree, with Defense Secretary James Mattis and Chairman of the Joint Chiefs of Staff General Joseph Dunford both acknowledging Iran’s compliance and warning of damage to America’s credibility.

Yet, Trump seems to be leaning towards a unilateral withdrawal. By May 12, Trump must once more waive important economic sanctions to stay in compliance with the agreement, which he has threatened not to do this time unless Congress or European allies “fix the terrible flaws.” Essentially, Trump is holding the deal hostage in hopes of further punishing Iran for matters external to the JCPOA, such as the ballistic missile program, human rights, and other issues. Last week, French President Emmanuel Macron and German Chancellor Angela Merkel visited the White House in hopes of saving the deal, but it’s not clear their efforts will succeed.

These European leaders are attempting to appease Trump by signaling openness to negotiated follow-on agreements. But Secretary of State Pompeo, himself a tough critic of the deal, has strongly implied these efforts may not be enough. Macron disclosed the stark reality: “My view is… that he [President Trump] will get rid of this deal on his own, for domestic reasons.” Iranian President Rouhani has informed Macron that with support from other signatories, “we will stay in the nuclear agreement 100%.” However, a U.S. withdrawal would inevitably empower Iran’s hardliners and put pressure on Rouhani to respond in kind.

The best result we can hope for is that this is a sham ultimatum, and Trump backs down and further postpones action. Perhaps Trump will decide to take Macron up on his side offers, thus being able to “win” in the eyes of his supporters while also salvaging the deal and national security benefits it carries. Unfortunately, the ascendance of ultra-hawks John Bolton to national security advisor and Mike Pompeo to Secretary of State brings the beating of war drums and calls for regime change directly into Trump’s inner circle. Pompeo advocated for military strikes on Iran during negotiations, and Bolton has gone so far as to promote “the overthrow of the mullah’s regime in Tehran” by 2019.

If Trump abandons the agreement on May 12, he could cause irreparable damage to America’s diplomatic credibility. Given that the U.S. is only weeks away from a historic summit with North Korea to address one of the most intractable diplomatic crises, that may prove to be a major hurdle. 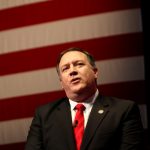 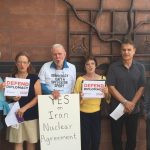