U.S. Support for the Bombing of Yemen to Continue, for Now

This article was originally published on CommonDreams.org, and subsequently published by PeaceVoice, Counterpunch, Antiwar.com, and the Smirking Chimp. In the image above, Secretary of State Mike Pompeo meets with the Saudi foreign minister on April 28, 2018, less than a week after the Saudi-led coalition bombed a wedding in Yemen.

On September 12, Secretary of State Mike Pompeo officially certified Saudi Arabia and the United Arab Emirates “…are undertaking demonstrable actions to reduce the risk of harm to civilians and civilian infrastructure resulting from military operations of these governments.” This is required to allow U.S. planes to continue refueling jets for the Saudi/UAE coalition, without which it could not keep dropping bombs on targets in Yemen. Secretary of Defense James Mattis concurred with Pompeo, though congressional legislation required only Pompeo’s say-so.

Anyone who follows international news could be excused for accidentally spitting out their morning coffee at Pompeo’s statement. Among many attacks on civilian targets in Yemen, last month’s bombing of a school bus in a market district,  which killed 51 people including 40 children, was among the most horrific, so much so that even Saudi Arabia admitted it was “unjustified.” Of course, the Saudi regime should not be allowed to merely get away with investigating itself (indeed, Human Rights Watch released a 90 page report which is highly critical of the Saudi-UAE coalition’s investigations into its attacks, particularly on civilians).

That bombing, which shocked the conscience of the global community, was only the latest massacre of civilians in Yemen. In 2016, Saudi attacks on a market and funeral hall killed 252 people. In response, the Obama Administration halted the sale of precision guided munitions to Saudi Arabia citing human rights concerns, but then-Secretary of State Rex Tillerson overturned the ban in March, 2017.

The humanitarian catastrophe in Yemen is considered the world’s worst at this moment, with well over 10,000 people having been killed (an estimated 20% are children) and 15 million of the total Yemeni population of 23 million considered “food insecure,” according to the United Nations. Add in the planet’s worst outbreak of cholera in some time, affecting over a million people, and one gets a picture of the dire situation since the civil war began in 2015.

The United States is the number one weapons dealer in the world, and Saudi Arabia is our biggest customer, having purchased over $100 billion in armaments since 2010. The bombs in all three attacks cited above were built by Bethesda, Maryland-based Lockheed Martin, the world’s largest weapons manufacturer and the largest U.S. government contractor of any kind, with net sales of over $13 billion in just the second quarter of this year. It’s not hyperbole to state Lockheed makes a killing, in more ways than one.

Earlier this year, the U.S. Senate attempted to intervene to stop U.S. in-air refueling of Saudi jets and other logistical, intelligence and targeting support. The bipartisan measure, led by Sen. Mike Lee (R-UT) and Bernie Sanders (I-VT) failed on a procedural vote, 55 to 44. Similar proposals also fell short in the House of Representatives, but peace- and human rights-minded House leaders, led by Reps. Adam Smith (D-WA), Ro Khanna (D-CA), Mark Pocan (D-WI), Tulsi Gabbard (D-HI), Jim McGovern (D-MA) and others will soon try again to stop U.S. support for the slaughter, thinking the school bus bombing may have shocked some hearts and may change some minds.

Concerned individuals should contact their House member and demand they support this common sense effort to cease U.S. participation in this tragedy, without which the Saudi-led coalition could not continue and would likely be forced to negotiate more seriously with the Houthi-backed government. Unfortunately, this conflict is depicted as part of a regional Sunni-Shia supremacy struggle between Saudi Arabia and Iran, which supports the Houthis, but the people of Yemen need the nightmare to end, regardless of geostrategic politics.

Another, more long-term action people of conscience can undertake is to ensure one’s investments or other financial instruments do not benefit Lockheed Martin and other weapons contractors profiting from endless wars in the Middle East and elsewhere. Code Pink, Peace Action, American Friends Service Committee and dozens of organizations support the Divest from the War Machine campaign, where one can find out more about how to divest individual or organizational holdings from the arms merchants. Another good resource, focused on divestment from nuclear weapons manufacturers, which in general are also the largest weapons makers overall, is Don’t Bank on the Bomb.

Divestment is an important long term strategy, and a strong moral statement. However, Congress can act now, and must. 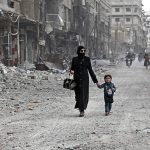