“Our nation’s endless wars are on autopilot, with Trump fitfully grabbing the steering wheel until his attention wanders somewhere else. Today’s votes are a step toward Congress reclaiming its power — and duty — to determine U.S. war policy.” said Jon Rainwater, Executive Director of Peace Action.

“We’ve come within moments of going to war with Iran not once, but twice. First last summer with aborted airstrikes, and then with the military exchange triggered by the assassination of Iranian General Qassem Soleimani,” Rainwater continued.  “Only a fool would believe that the danger is over. The U.S. is still in a high stakes standoff with Iran. We can’t tempt fate a third time because we might not end up so lucky. Representative Ro Khanna’s bill yanks the budgetary pursestrings shut to prevent Trump from stumbling into a regional, likely global, conflagration.”

“The vote to pass Representative Barbara Lee’s bill to repeal the 2002 Iraq Authorization for Use of Military Force (AUMF) is important for many reasons. The Trump administration is actively using the 2002 AUMF to justify military action against Iran. The bill ends that legal sleight of hand. At the same time, repealing this outmoded, unneeded war authorization is necessary to put decades of endless wars behind us,” added Kevin Martin, President of Peace Action. 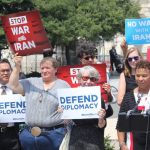 Diplomacy Instead of a Disaster in IranPress Statement 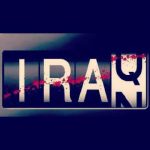