Why am I in Afghanistan?

Why am I in Afghanistan?

When many people were concerned about the Bush administration bombing another country unjustly, namely Iran, I decided I needed to go to the country to find out about this so-called “axis of evil.”

While there was much to criticize about the Iranian government, I found the people to be the most hospitable I have encountered.  I also found a lot of the demonizing of the country to be unfounded.

I’ve been spending much more time working on a change in Afghanistan policy since the beginning of the year.  As with Iran, I thought that traveling to Afghanistan would help deepen my understanding of the country and discuss, with more authority, policy recommendations.

Like Iran, I wanted to go on a peace delegation to act as a citizen-to-citizen diplomat.  Because of the security situation, only one NGO that I could find was doing delegations:  Global Exchange.  Unfortunately, the timing was so close to the beginning of the year that it didn’t work.  I was hoping that I could put together a delegation with NGO colleagues, but the financial crisis meant that many could not afford the cost or the time. 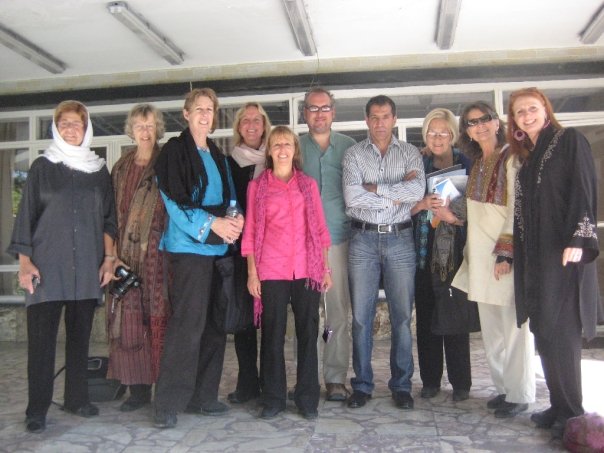 The delegation with director Mirwais Wardak of Cooperation for Peace and Unity.

Then I found out that Jodie Evans, a name I had heard over ten years ago when I worked with Greenpeace and Rainforest Action Network and who is one of the founders of CodePink, was organizing a delegation.  She graciously let me join.

It’s been about a year since I put money in Peace Action’s budget to go to Afghanistan and until three days before my trip, I never felt scared to go.  That’s when everyone started to forward me every horrible story of suicide bombings, kidnappings, assassinations, etc.  Then a senior, trusted government official told me that there have been several kidnappings of Americans that have not been publicized.  I felt scared.

On my flight to Dubai, I flew over the border of Iran and Iraq.  I thought about all the wonderful Iranians I met a few years ago and how they would be negatively affected by the gasoline sanctions being proposed by the U.S. Congress.  I thought about the hundreds of thousands of innocent Iraqis who have been, killed, wounded, displaced or forever traumatized by the war, based on lies pushed by the Bush Administration.  I thought about how U.S. foreign policy is continuously based on military might or economic force rather than diplomacy and true humanitarian aid and development.  I knew that this trip to Afghanistan came at a key moment and I would do my utmost to change U.S. policy.

I spent a few days in Dubai before flying to Afghanistan, which is worthy of its own blog post at a later time.  The city felt like mixing Las Vegas and Disneyland pumped with steroids and very rich Arabs.  I had fun, of course, despite the whole environmental and social disaster of an overbuilt city in the desert with fake islands shaped like the world and palm trees, the largest mall in the world and an indoor ski resort.

At the Dubai airport, I met all my fellow delegates.  I am the youngest and the only male in a delegation of nine.  It’s an amazing group of activists and peace leaders, some with deep Afghanistan expertise.  I think we all felt better after sharing our fears, hopes and goals for the trip.

We flew Pamir airlines from Dubai to Kabul, which reminded me of Cubana Airlines: older second hand planes that ran on their own (late) schedule.  It was a decent sized plane, a 737, with only 35 passengers.

I sat next to a Pakistani who lived in Kabul and worked for a bank doing micro-finance.  The average size of the loans he said was $1,400.  The American sitting behind me had been living in Kabul for four years working for a Christian NGO that worked on irrigation projects and poverty issues.  He was so kind to talk with me for most of the two-plus hour flight.  Recently, he found out that the Taliban planned to kidnap him and his wife.  Yet, he continues his deep commitment to the poor.  He has had to make changes, but his security is still without guns.  He doesn’t proselytize and most of his staff are Afghanis of various faiths.  I think that this is a person Jesus would be proud of.

It didn’t surprise me to hear that he wouldn’t take any Commanders Emergency Response Program (CERP) funds.  This is, basically, an outrageously large U.S. military slush fund — there was about a half a billion dollars in the last supplemental.  Some military commanders try to do the right thing and some don’t.   As he told me, they are not trained in community development well enough and most commanders are on the ground for six months, when it takes years to understand the country and develop proper relationships.  His main concerns about taking CERP funds and working with Provincial Reconstruction Teams (PRTs) was “it’s a great way to get killed” and they expect you to inform on Afghans.

Before landing, the flight attendants did the weirdest business practice that I still don’t quite understand.  I guess everyone was over charged for their ticket.  To get your refund you had two choices:  Take $35 or enter a lottery with two winners of $180.  I took the $35 and was bit suspicious when the winners were in first class.  I was too jet-lagged to calculate the odds, but you gamblers can tell me if I made the right choice.

Kabul airport only has one runway.  The 747 approached the valley surrounded by mountains, split by a river with more bumps, turns and movement than I am used to.  There are no gates.  You walk down the steps into a newly constructed building to deal with immigration and customs. 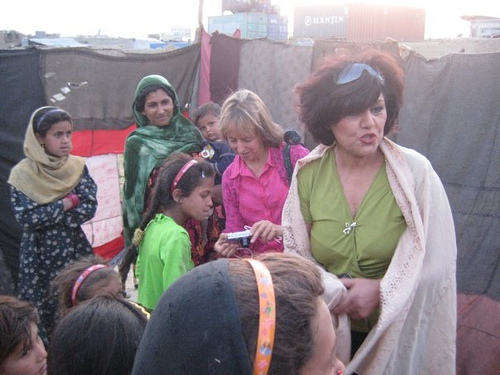 While waiting to change money, I chatted with a scared Kiwi — a guy from New Zealand.  He flew in by himself, didn’t have the phone number of the person who was going to pick him up and was clearly nervous about the situation.  He asked all kinds of questions about security and got extra freaked when we explained that the Kandahar Province where he planned to give a presentation was the most dangerous part of the country.

After some confusion of where we should meet our fixer — journalist lingo for guide and logistics person — we loaded up in a white bus.  Several people, very experienced with security matters in Afghanistan, told me the best thing for me to do is look as inconspicuous as possible: wear drab colors, wear more traditional attire, grow a beard, etc.  So, I felt nervous as we approached this huge bus that we would all use to travel in Kabul.  I thought it was the most conspicuous vehicle and many warned me that the road from the airport was one of the most dangerous in Kabul.  We were going to be driving through a traffic circle where several civilians died from a bomb within the last several days.

On the walk to the bus, I noticed that I thought it didn’t look very militarized.  There were several armed guards and checkpoints, but not what I imagined.  It wasn’t until the bus drove for a quarter mile that I realized we were just approaching the major checkpoint to get into the Airport, which had turrets, humvees and plenty of troops. 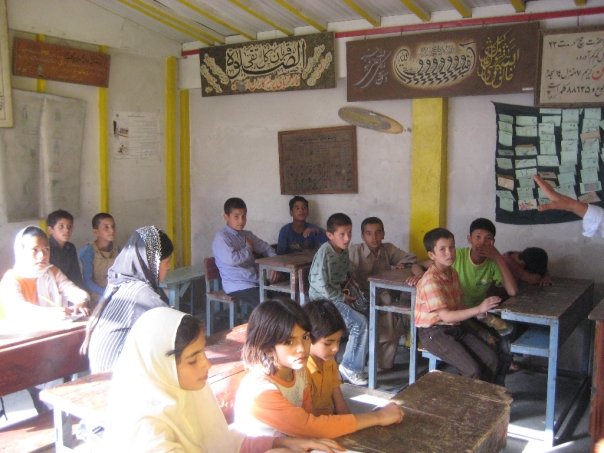 The delegation passes through a schoolhouse

My initial feelings driving on the main road was that Kabul reminded me of when I spent two weeks in Mumbai, India while working on the Greenpeace ship the Rainbow Warrior.  It was hot, dusty, smelly to my western nose and I felt air pollution in my sensitive lungs.

After we settled in our sleeping quarters, we met a former Deputy Minister of Finance, and his wife, at a restaurant.  I enjoyed the food, especially the chickpea dish that reminded me of Indian food.  He told us a plethora of interesting tidbits.  For example, 30% of Afghanistan’s GDP is from poppies that make opium and heroin and is connected to the Russian mafia.  Additionally, the country contains some amazing natural resources including marble and wood.  Both of which, if harvested sustainably and finished projects made in Afghanistan, could provide significant income for a country that gets minimal income from mostly customs taxes and is dependant on international aid.

I will be writing more as time permits on this extremely busy and exhausting trip.  Please note that for security reasons, I will not discuss where we are staying, our itinerary and may leave out or change the names of people that we meet.