Peace Action’s Political Director Paul Kawika Martin and Colonel Ann Wright respond to Obama’s decision on CNN. The pair, who had just traveled to Afghanistan in October, tell the US “Don’t Escalate a Failing War.”

The first step in providing Afghans security and weakening the Taliban and violent extremists is to remove recruiting incentives. It’s time to stop air and Predator drone strikes that tend to kill, injure and terrorize civilians. It’s time to stop arbitrary detentions and harsh treatment of prisoners that would be unacceptable here. 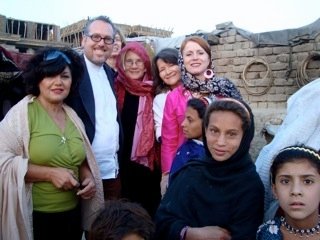 Paul and Ann this Autumn in Kabul, Afghanistan.

While those in major cities live in relative security, rural Afghans fear violence from insurgents or U.S. and NATO forces. Many fear civil war or the return of the Taliban. Afghanistan requires more trusted Afghan police and security forces. These forces are paid only $110 dollars a month — not a living wage — and payments are regularly late. Little wonder these forces are corrupt, poorly motivated and have a high rate of desertion. The Taliban pays its foot soldiers far better.

Investing in a living wage and pressuring Hamid Karzai’s government to punish corruption swiftly will pay more security dividends than the $1 million a year it costs to send one U.S. soldier.

Read the rest of the article at CNN…