Getting Fired up in the White Mountains: Northeast Regional Retreat

Nearly one-half of people polled now think the US can make major cuts in defense spending without putting the country in danger, according to a 7/18/11 Rasmussen Poll.  What will it take to translate that sentiment into policy change? Movement-building and a stronger, bolder Peace Action.

In the rush of activities and mobilizations, organizers rarely get the opportunity to step back and explore ways to improve our practice.

That is why the core organizers of Peace Action affiliates in the northeast region decided the time was right to gather at World Fellowship in the White Mountains of New Hampshire to get fired up. 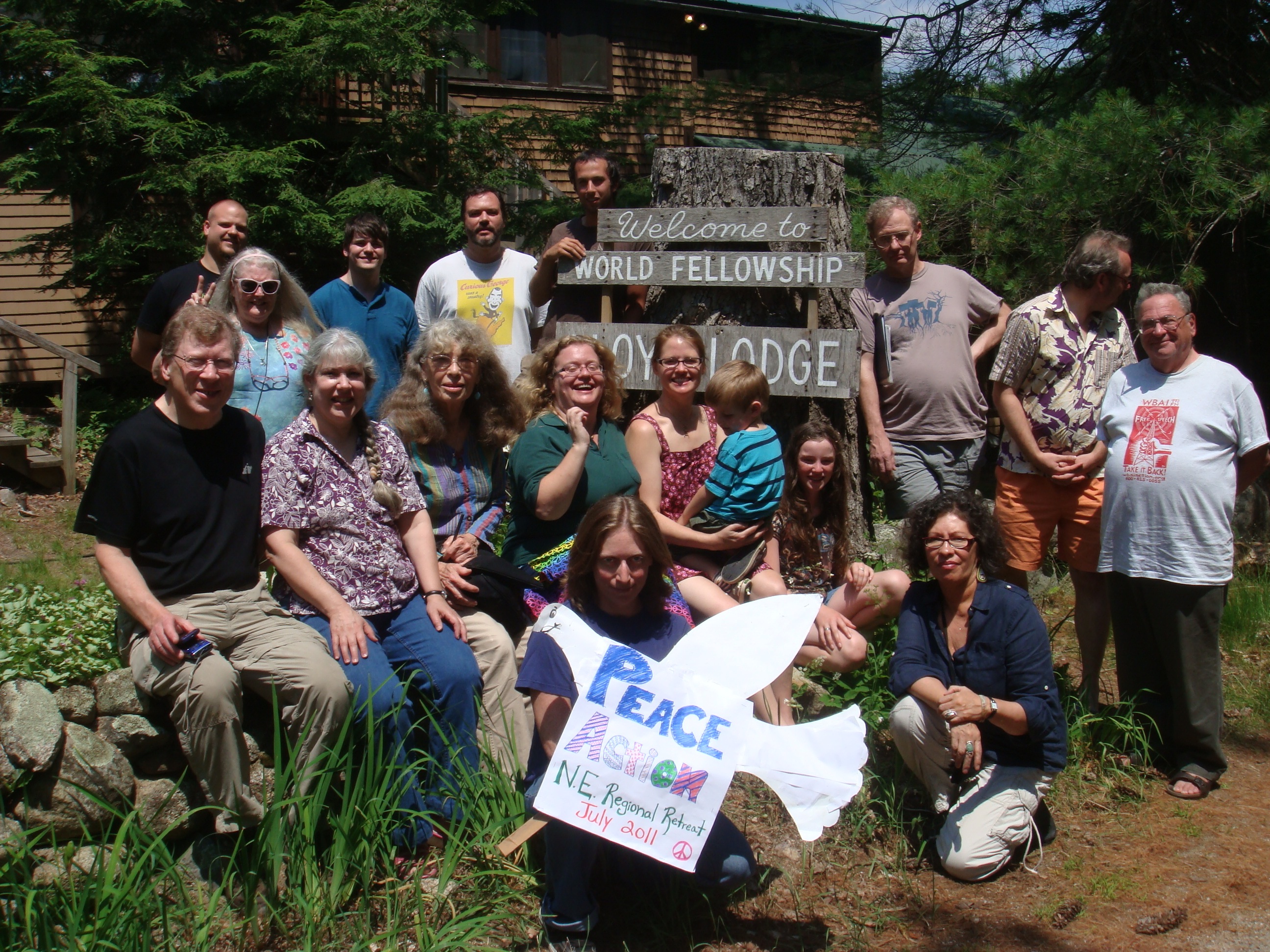 The July 9-11, 2011 training retreat agenda included discussions on building a stronger movement to cut the Pentagon budget to fund human needs and bring our tax dollars home, organizing the 2012 peace vote and growing Peace Action online and in our communities.

NH, ME, MA, and NY shared their challenges and victories as part of the two-day seminar, which was a blend of fun, skill-building and inspiration.

Although the participants ranged in age from early 20’s to senior citizens, all had come into activism as a personal and political reaction to difficulties and challenges in our world or community. All, no matter what age or background, shared a belief in the need for organized action for a better world.

Kevin Martin, Peace Action Executive Director, in opening the discussion of the weekend said, “We must help empower our constituents, help raise people’s sights and broaden their understanding of the decline of the US empire.”

A lively discussion ensued about the nature of the “political moment” and what is on the minds of people in our communities. Most agreed that Peace Action needs to articulate an alternative foreign policy, get more onto an offensive footing and join in with others to find ways to express, in positive terms, the way out of the mess the country and world is in.

In the discussion on the 2012 peace voter efforts, New Hampshire Peace Action talked about how they successfully “bird dogged” Candidate McCain. He revealed, due to a great “bird dog” question, that occupying Iraq for 100 years was not out of the question. As one person said, “That was a shot heard round the world!” Despite our limited resources, Peace Action made a big contribution to the 2008 elections.

One of the last frontiers of 21st century organizing is online. Emails or Facebook or Twitter will never replace the face-to-face grassroots work we must do to organize in our communities.

Jonathan Williams, Pace Action Program Associate, outlined the “ladder of engagement” from signing a petition or an event sign in sheet to becoming activists and donors. Each affiliate brought and reviewed their last 2 months of emails. All left with an idea or two for how to improve their online communications.

The campaign planning session was a spirited exchange on how to put cutting the Pentagon budget into a set of doable, timed steps that build pressure on the decision makers and wins victories along the way. We took a few steps back for a deeper look and inspiration from the Montgomery bus boycott in 1955. No great social change has happened without a campaign style of organizing.

The heart and soul of the retreat was the session on strengthening Peace Action affiliates and chapters. We took a look at the organizational culture of decision-making and integrating new people into leadership. We discussed the challenges of setting goals and planning. Across the board participants cited recruiting and retaining members as one of the biggest challenges.

The evaluation was meaty with praise as well as ideas for improvements for the next retreat. Plans are being made for regional retreats in other areas of the country. The national staff is more than willing to do trainings in your area or connect you with local trainers we are in touch with.

Special “shout outs” go to Anne Miller and Will Hopkins of New Hampshire Peace Action and Shelagh Foreman and Cole Harrison of Mass Peace Action for agreeing to be the “frogs in our biology class.” We had the opportunity to dissect detailed accounts of their efforts in a number of sections of the retreat agenda!