Ready to rumble for jobs, not war and more weapons? 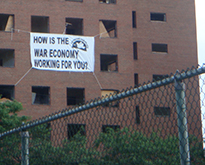 Something is missing in the swirl of news reporting on the debt ceiling deal struck on August 2 by the Congress and the President for close to $1 trillion in cuts in discretionary programs over the next decade.

Will the 58% of  discretionary spending that goes to the Pentagon take a hit in the name of deficit reduction?

The short answer is not necessarily, not unless we are ready to rumble.

Even the Senate Armed Services Committee leaders Sens. Carl Levin and John McCain have no idea what the deal does to the Pentagon budget.

The cruel irony is the debt ceiling deal exempts spending on the wars in Afghanistan and Iraq, even though war costs are one of the biggest factors driving up the national debt by over a trillion dollars.

Caps have been set for “security and non security” spending. The cuts will follow. The security category lumps together the Pentagon with the State Department, Veterans Affairs, Homeland Security and nuclear weapons systems.

Right now cuts to the Pentagon budget are not guaranteed. It is threat. Without a grassroots rumble the ax won’t fall on the Pentagon or weapons of mass destruction, it will land on veteran’s benefits or diplomatic efforts.

It’s a fight, not a discussion.

The military budget has doubled in the last 13 years. Up until now there has been a bottomless till for weapons and wars. Lawrence Korb, former assistant secretary of Defense under President Reagan, says, “in real or inflation adjusted dollars it is higher than at any time since World War II, including the Korean and Vietnam wars and the height of the Reagan buildup.”

Secretary of Defense Leon Panetta released a statement stirring up fear about the threat of across the board cuts if the “sequester mechanism” took effect and the Committee of 12 Congressional representatives fail to reach a compromise on how to make the next $1.5 trillion in cuts.

He also said,” We must be accountable to the American people for what we spend, where we spend it, and with what result. While we have reasonable controls over much of our budgetary information, it is unacceptable to me that the Department of Defense cannot produce a financial statement that passes all financial audit standards.”

That’s our mandate to rumble. The Pentagon and the Congress must be made accountable to us for what they cut, spend and the result. Pouring scarce resources into the Pentagon is not a jobs program.

Unemployment has become a constant. CNBC, the business news website, reported on August 2, “The job cuts were up 60 percent from June, and 59 percent higher than the 41,676 layoffs recorded in July 2010. It was the largest monthly total since March 2010, and the first month this year that the government was not the biggest job cutter.”

Cuts in “non security” discretionary spending means layoffs. The 26 million people unemployed or underemployed in our communities can’t afford for that to happen.

So let’s rumble during the August Congressional recess. Take the facts to our Congressional representatives. We can and must cut the Pentagon budget to fund jobs and services in our communities.

Although the National Commission on Fiscal Responsibility and Reform, the bipartisan commission chaired by former Senator Alan Simpson and Erskine Bowles, did not have many recommendations to cheer about, but they got one thing right. Cutting military spending is possible.

They proposed closing one third of US bases around the world as an immediate savings. Not only is it a wise budget cut, it fits with how US foreign policy needs to change in the 21st century. We can’t afford a militarized foreign policy of endless wars and occupations and the modernizing of nuclear weapons systems.

In The Hill, Tom Colina, the research director at Arms Control Association wrote, “By carefully reducing our nuclear forces and scaling back new weapon systems, the United States can save billions. Moreover, by reducing the incentive for Russia to rebuild its arsenal, these budget savings can make America safer.”

In June, 2010, the bi-partisan Sustainable Defense Task Force initiated by
Rep. Barney Frank (D-MA), working in cooperation with Rep. Walter B. Jones (R-NC), Rep. Ron Paul (R-TX), and Sen. Ron Wyden (D-OR), proposed ways to cut Pentagon spending in their report, “Debt, Deficits and Defense: A Way Forward.” It can be done if the political will is mustered.

That’s where the peace and economic justice movements come in: generating the political will.

Along side of the misery of the budget cuts, there is an opportunity to win real cuts in military spending. Joel Rubin in the Ploughshares Blog, “There is still much to be defined, yet the inherently competitive situation now shaping up on defense spending is welcome news to those who have been long seeking to get rid of the bloated weapons systems that weaken our economy while doing scant little to advance our national security.”

The President said in April when he announced his framework for dealing with the federal budget that “we’re going to have to conduct a fundamental review of America’s missions, capabilities, and our role in a changing world.”

New movements are taking the opportunity for such a fundamental review and a change in the spending priorities. On August 4, the AFL-CIO issued a statement, “Fake Political Crisis and Real Economic Crisis- A Call for Leadership and Action.” The AFL-CIO Executive Council said, “It doesn’t have to be this way. There are real solutions to the job crisis, but real solutions require government action.”

They also noted, “There is no way to fund what we must do as a nation without bringing our troops home from Iraq and Afghanistan. The militarization of our foreign policy has proven to be a costly mistake. It is time to invest at home.”

It’s going to take a an adamant, militant grassroots rumble to demand demilitarization of US foreign policy, to end the insanity of endless and countless wars draining the scarce resources needed for people, the world over, to have jobs and a decent life.

Judith Le Blanc is the Field Director for Peace Action, the largest grassroots peace group in the US.  jleblanc@peace-action.org