Only One Place to Cut: Pentagon Budget 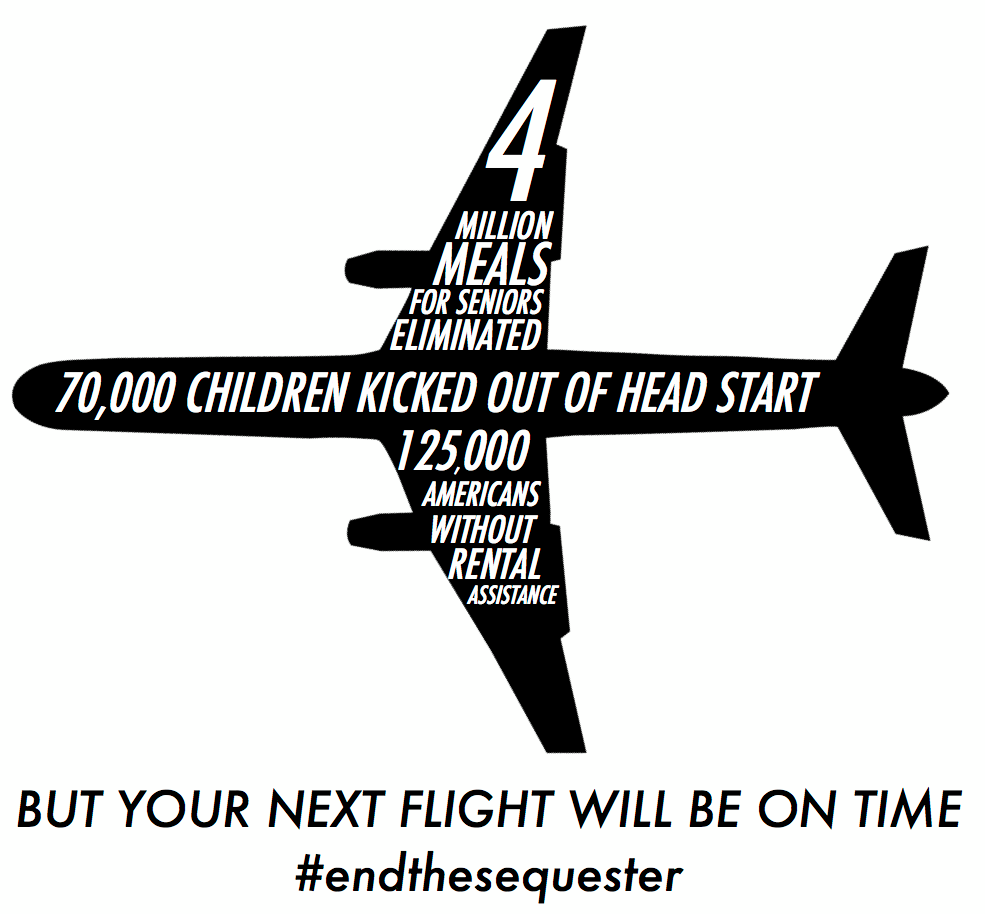 Sequestration, across the board cuts, is no way to run the federal government. Some say it is stupid or dumb. Plain and simple, it is a bad idea with no basis in fact.

Now academic research has debunked the idea that cuts and austerity are the way out of the economic crisis.

The Congress acted to fix the sequestration chaos for frequent flyers. They allowed the Federal Aviation Administration to move money from the longer-term infrastructure account to pay the salaries of the air traffic controllers. While flights might fly on time, the sequestration chaos continues everywhere else, in our schools, national parks and on the unemployment line.

We must tell Congress: Repeal sequestration.

Now local services and jobs are being cut town by town, in all 50 states. Yes, as Tim Murphy documents in Mother Jones, we have become the United States of Sequestration.

Join Peace Action and the Campaign for America’s Future and over 500,000 people who have already done so last week to tell Congress to end the sequestration chaos.

There is one place cuts could and should be made, the Pentagon budget.

Why did the economy and the federal budget go off the tracks? Two wars, tax cuts for the rich, corporate tax loopholes and a runaway Pentagon budget that has never been audited.

What is the biggest drain of our tax dollars? It is the explosion of the Pentagon budget since 9/11 on new weapons, military bases around the world and nuclear weapons that serve no purpose except to generate international tensions.

Write an email to Congress and add this paragraph:

“We need to move the money from wars and ever newer weapons to fund human services and jobs that we need in our communities instead!”

The sequestration chaos will not end without mobilizing the huge outpouring of public pressure on Congress.

Write an email today; Join teachers, first responders, and the unemployed in actions in your community.

There is a smart, good and doable solution. We must move the money from where it is in the Pentagon budget, in the tax free, mega profits of the corporations to invest in programs that will create jobs and turn the economy around.