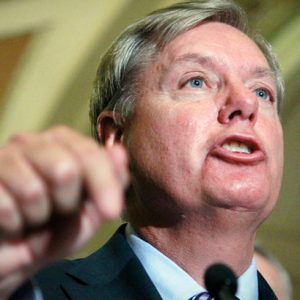 FILE – In this Nov. 29, 2011, file photo Sen. Lindsey Graham, R-S.C. speaks to reporters following a Republican policy meeting on Capitol Hill in Washington. Lawmakers who came to Washington demanding budget cuts face a tough test now that President Barack Obama and military leaders want to shrink the force, shut down bases and cancel weapons to achieve them. “It’s funny that we want to save money everywhere except when it can bother us,” Graham, a member of the Armed Services Committee, said in an interview. He’s one of the few lawmakers who favors another round of domestic base closings. (AP Photo/Manuel Balce Ceneta, File)