If Israel Won't Come to Helsinki, Helsinki Will Come to Israel

On December 5th, 6th and 7th, over 100 delegates from at least 14 countries gathered first in Haifa and then in the Israeli-occupied West Bank town of Ramallah, for an historic international conference on creating a nuclear weapons free, weapons of mass destruction free Middle East. According to the organizers, this was the first such conference ever to be held in Israel.

The conference was held in Israel because an official United Nations (U.N.) sponsored conference on the topic, agreed upon by all delegates at the Nuclear Non-Proliferation Treaty Review Conference of 2010 in New York City and scheduled to be held in Helsinki, Finland in December 2012 never happened. The U.S. and Israel scuttled the conference at the last minute claiming that the timing for this conference was off due to there being “too much tension in the Middle East.”

Undaunted, an alternative conference was organized in Helsinki in December 2012 by representatives of some international NGOs. Issam Makhoul, a former MP in the Israeli Knesset and one of the primary organizers of the Haifa Conference said at that conference of NGOs, “If Israel won’t come to Helsinki, Helsinki will come to Israel.”

The International Conference in Haifa and Ramallah was the result of that pledge.

Delegates to the conference came from Israel, Palestine, Belgium, France, Senegal, the Congo, Germany, Egypt, Cyprus, Greece, Slovenia, Bulgaria, Japan and the United States. There were also 4 current members of the Israeli Knesset and 4 former members of the Israeli Knesset in attendance, joined by elected officials from progressive political parties in Europe. Sharon Dolev, Director of the Israeli Anti-Nuclear Movement, was featured on a couple of panels, including one titled “Civil Society and the Anti-Nuclear Movement,” moderated by Jackie Cabasso, Executive Director of the Western States Legal Foundation,

Mr. Tadadoshi Akiba, former mayor of Hiroshima and a founding member of Mayors for Peace, now with approximately 6000 members, provided much of the context for why it is so important for the world to work toward the elimination of nuclear weapons during the lifetimes of the Hibakusha, Japanese survivors of the 1945 atomic bombings of Hiroshima and Nagasaki. The average age of Hibakusha today is 78, so if the world is to help them to achieve their dream of a nuclear weapons free world in their lifetimes, the time is short! The current mayor of Haifa, Mr. Yona Yahav, pledged that he would join Mayors for Peace.

Madelyn Hoffman, New Jersey Peace Action’s (NJPA’s) Executive Director, attended on behalf of both NJPA and Peace Action, the nation’s largest grass roots disarmament organization, founded in 1957. She brought with her Peace Action’s 56 year commitment to reducing and ultimately eliminating all nuclear weapons and a desire to move toward a genuine and lasting peace in the Middle East by supporting the Israeli movement for disarmament. That movement is urging that Israel first abandon its decades-long policy of “nuclear ambiguity” and acknowledge its nuclear arsenal, then join the Nuclear Non-Proliferation Treaty, both important first steps toward nuclear disarmament.

The conference took place just days after a negotiated agreement was reached with Iran at a conference in Geneva. That agreement exchanged yet another assurance from Iran that it would not develop nuclear weapons and never had any intentions of doing so for a modest easing of sanctions against the country. While there are serious concerns about the way in which the agreement was reached and the inability of more conservative members of the U.S. House and U.S. Senate to give up their desire for war and increased sanctions on Iran, the fact remains that, if upheld, Iran and the West reached an agreement around nuclear weapons development through diplomacy and thankfully, war was averted, at least temporarily.

The conference also took place a few months after a U.S. military strike against Syria was averted through tremendous public opposition in the U.S. and another successful diplomatic agreement, this one brokered by Russia and requiring Syria to destroy its chemical weapons. Again, whether or not one agrees with negotiating such agreements first by threatening war, the fact remains that war was avoided by high level diplomacy.

Given both of these important agreements, conference participants believe that any remaining ability for Israel to rightly claim an existential threat seems to have been eliminated. Participants in the conference also stressed that a turning point seems to have been reached – one in which an important choice needs to be made about what’s next for the Middle East. Now the dilemma exists: should all states in the Middle East have nuclear weapons or weapons of mass destruction or should no state? Conference participants opted for the latter. Anything else, they argued, would simply allow the sole nuclear power in the region to use the threat of nuclear war to increase its dominance in the region, rather than to work toward achievement of genuine peace with its neighbors.

Israeli participants in the conference used the conference to launch plans for the creation of an Israel-based coalition to address issues of nuclear weapons and nuclear power. Some of their demands in regard to the state of Israel are for determined and persistent activity to achieve a Middle East free of nuclear weapons and all WMD; constructive, good faith participation in the Helsinki Conference whenever it is rescheduled; accession to and ratification of all treaties and instruments related to nuclear and all weapons of mass destruction; cessation and prohibition of acquisition, production, stockpiling, threatening or using nuclear weapons; and an end to the Israeli occupation of Palestinian territories as part of a just and peaceful solution to the conflict.

Of course, the Middle East isn’t the only region in the world that needs to disarm, but a nuclear weapons free/weapons of mass destruction free Middle East would be a good start and a good model, for countries like India/Pakistan, Russia, Great Britain, China, France and the United States. The Nuclear Non-Proliferation Treaty requires that nuclear disarmament be the ultimate goal of the nuclear states and that no nuclear weapons possessing nation adopt or follow policies that will lead to a new nuclear arms race.

The conference program in Ramallah focused at length on Israel’s Dimona nuclear reactor, located in the Negev, about 13 kilometers south of Dimona. At age 50, the nuclear reactor has not been inspected by the international community for a very long time. After hearing lengthy and detailed presentations of anecdotal evidence from Palestinian doctors about the potential health impacts of the operations of the Dimona reactor on nearby residents and the surrounding environment, conference attendees asked that Israel subject all nuclear facilities to International Energy Agency safeguards, monitoring and verification, similar to what Iran must do; move toward closure, decommissioning, containment and remediation of the Dimona nuclear facility; and achieve full public disclosure of radioactive and toxic contamination by the Dimona facilities of the air, soil and ground water.

If participants in the three-day conference pledge to do whatever they can to adopt and promote the preliminary goals reflected above, much progress will have been achieved. For some of us from the United States, it was important to be introduced to the grass roots movement for nuclear disarmament in Israel. It is also useful to remember that there will be a PrepCom in May 2014 for the 2015 Nuclear Non-Proliferation Treaty Review Conference. Our disarmament friends from Israel and from around the world will be in New York at that time. It will be good to make the most of that opportunity to let people here in the U.S. know just how widespread is the movement for nuclear disarmament and how peaceful negotiations can lead us closer to that goal.

Photos below by Madelyn Hoffman – Top photo, the first panel at the conference, from left to right: Former Speaker of the Israeli Knesset, Avraham Burg; Dr. Emily Landau, Senior Research Associate,Institute for National Security Studies; Professor Tadatoshi Akiba, former Mayor of Hiroshima and President of “Mayors for Peace”; Issam Makhoul, Former M.K. (member of the Knesset) and Chairman of the Emil Touma Institute for Palestinian and Israeli Studies. Bottom photo, Sharon Dolev, the director of the Israel Disarmament Organization and Madelyn Hoffman. 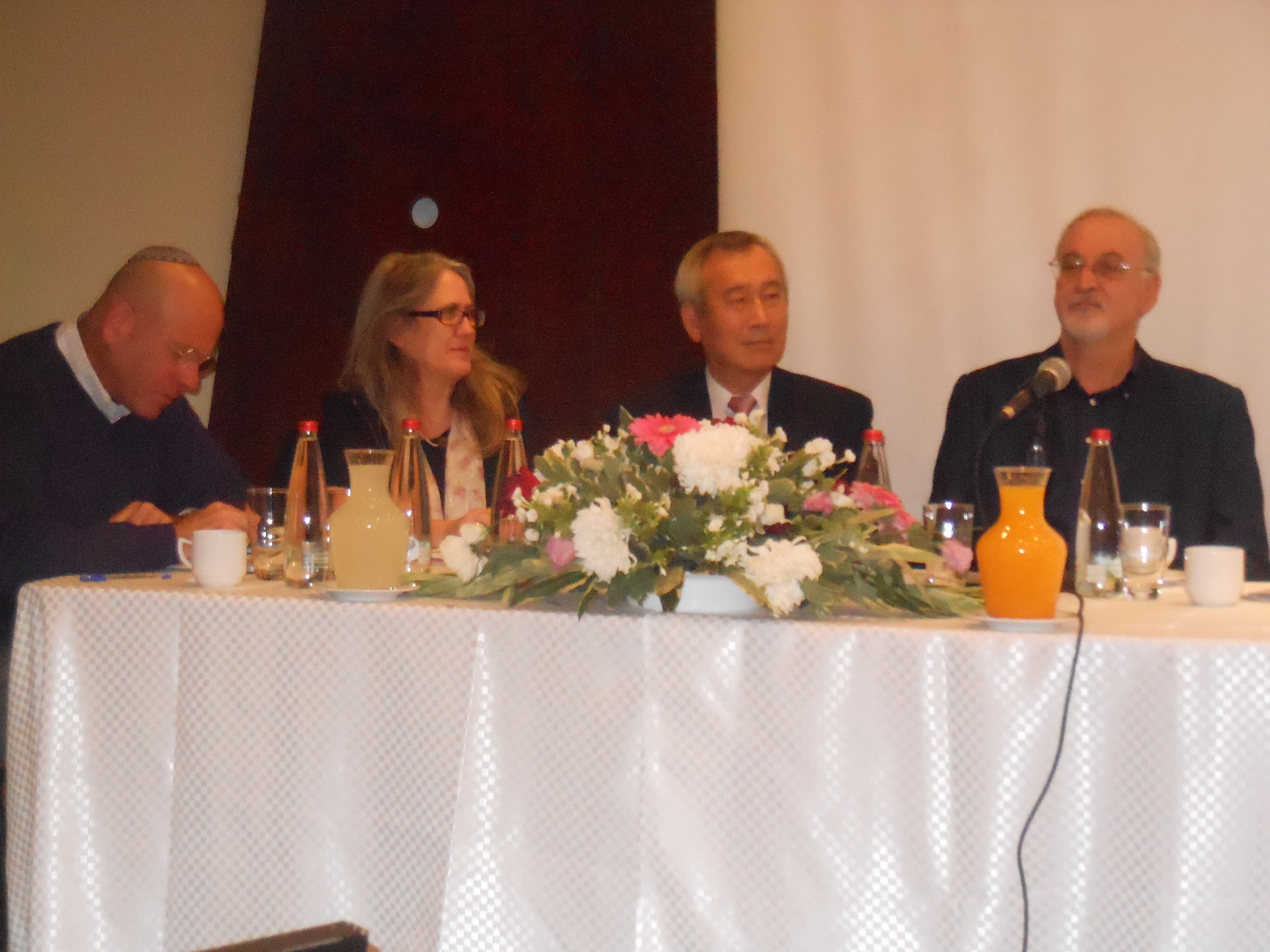 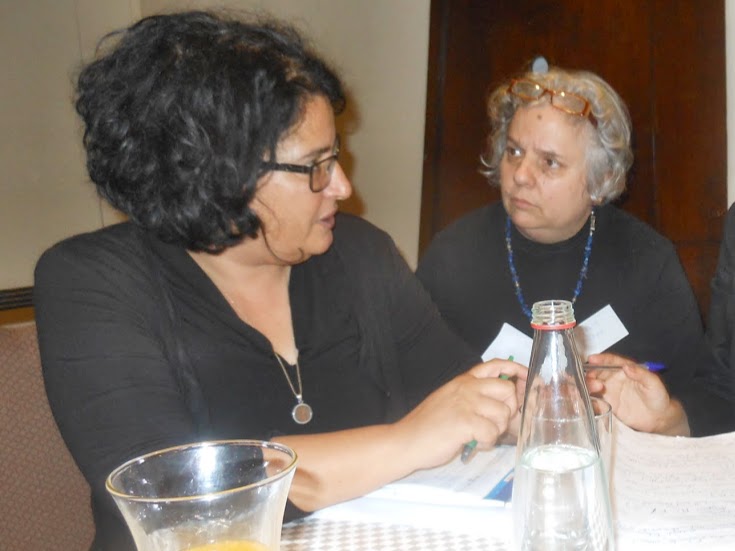