The Brain Trust, the Love Circle and the Seed Sowers 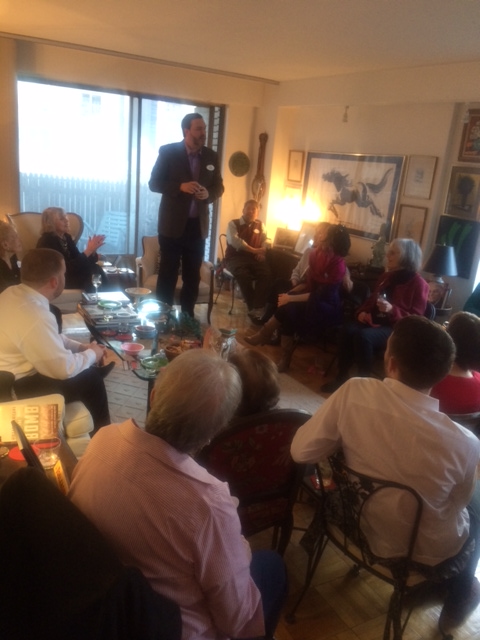 Last week I had a very enjoyable, short work trip to New York City. On Wednesday night, the indefatigable Judy Lerner (90+ years young!), who has served on the Peace Action national board for at least two decades, hosted a wonderful wine and cheese reception at her Manhattan apartment. Close to 30 Peace Action supporters turned up for a relaxed, social soiree, but we also talked a lot of politics as you can imagine (the picture above, taken by my Uncle, Todd Whitmer, who was there along with my brother, Kris Martin, shows just some of the assembled good folk) and raised a bit of much needed dough, thanks to a strong pitch by Joanne Robinson, Peace Action of New York State’s fundraising chair.

A few days before the event, I saw an RSVP list compiled by Sylvia Rodriguez Case, Peace Action of New York State’s superb administrator, and thought, wow, the brain trust of Peace Action in New York will be at the event, that’s great! And I got to thinking about the term “brain trust.” In Peace Action’s case, leadership is a collective, decentralized “brain,” and we have a lot of trust in our leadership to make the right decisions about priorities, strategies and tactics in our work.

Then I recalled Jim Anderson, board chair of Peace Action of New York State, from Buffalo, calling our national organizers’ meeting in DC two months ago a “Love Circle.” This wasn’t some hippie thing, he was encouraging a younger colleague to feel comfortable that her concerns would be heard and respected, even if they made some folks at the meeting a bit uncomfortable. Peace Actionistas certainly do form a trusting love circle where disagreements can be respectfully aired so we might reach higher ground together. I felt honored to be a part of that love circle last week at Judy’s, and also the following night at a chapter meeting of Peace Action of Staten Island, where I spoke to a terrific bunch of local supporters about the state of Peace Action’s work to support diplomacy with Iran, cut the gargantuan Pentagon budget, abolish nuclear weapons and end our country’s endless wars.

We also focused quite a bit on the April 24-26 Peace and Planet mobilization in New York City, which will bring together these issues as well as social, economic and racial justice and climate concerns. Right there at the meeting, Staten Island organizing powerhouse and Peace Action Fund of New York State board chair Sally Jones got firm commitments from over 50 people to turn out for Peace and Planet! And kudos to Peace Action of Staten Island chair Eileen Bardel for running a great meeting, keeping the agenda moving while also allowing space for everyone to participate, no easy feat!

Taking a long view, there are many social, political, economic and cultural factors (most out of our control) at play in why a movement catches fire or doesn’t in a particular place and time. One thing we can always control is sowing seeds that will lead to future growth in our organization and movement, and Peace Action of New York State is a leader in its investment in student/campus organizing. PANYS now has ten student chapters around the state, which didn’t just spring up by themselves. PANYS has invested in building those student chapters, and has a wonderful Student Outreach Coordinator Natia Bueno hard at work to spread this student chapter network even further (Natia will help lead a training session on student organizing for Peace Action affiliates and chapters next month, details TBA soon). Another crackerjack young organizer, Drew King, is working as our coordinator for Peace and Planet (and the apple didn’t fall far from the tree as his father, Jonathan King, is an MIT professor and Massachusetts Peace Action activist).

Peace and Planet will be an outstanding opportunity to build and support the Peace Action brain trust, embrace our love circle, and sow seeds that will blossom in myriad, wonderful ways we can’t fathom today. Please plan to join us!