Celebrating the World War I Christmas Truce, 100 Years Ago This Week 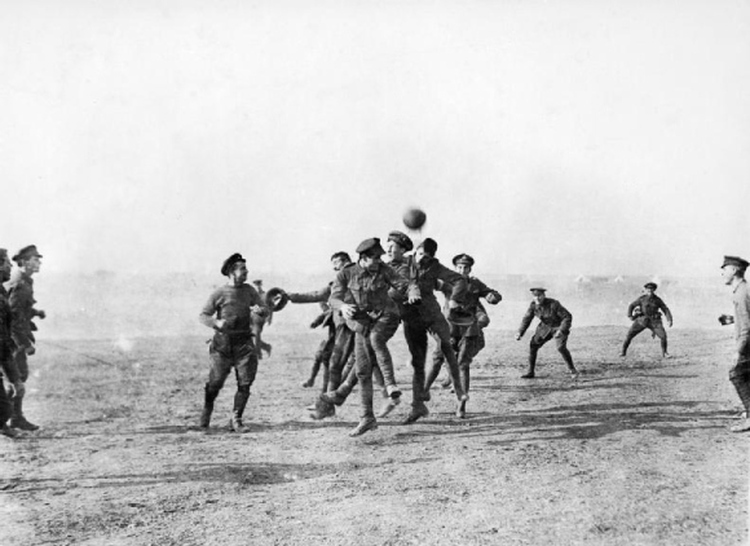 Football Not War! A game during the Christmas Truce, 1914.

In this season where “Peace on Earth” is often invoked, yet not always honored, remembering and celebrating peace history couldn’t be more appropriate. The story of the astonishing outbreak of the Christmas Truce one hundred years ago this week calls out for celebrating and sharing.

During the first winter of “the war to end all wars,” World War I, French, Belgian, Scottish, German, Indian and Algerian troops stalemated and hunkered down in trenches a mere 75 to 100 yards apart in France and Belgium observed a spontaneous Christmas Truce for two days, much to the consternation of the generals on both sides.

Soldiers who had been shooting at each other just the day before ceased fire, gathered and buried the dead in the no man’s land between their respective lines, sang Christmas carols together, exchanged food, drink and gifts, raised small Christmas trees, and even played football (soccer), with the German side reportedly winning most of the games.

The truce was so successful both sides had to bring up reserve troops from the rear who hadn’t participated in the truce in order to re-start the war. Remarkably, no one was court-martialed for voting with their feet and observing the truce.

I never heard of the Christmas Truce in school. I learned of it from folksinger extraordinaire John McCutcheon’s song “Christmas in the Trenches,” which is well worth a listen for inspiration on the real spirit of the holidays.

An outstanding book on the Christmas Truce is Silent Night: The Story of the World War I Christmas Truce by Stanley Weintraub. Superbly written and documented, it ably refutes skepticism in some quarters that the truce ever happened. The accounts in newspapers and especially letters to family by troops on both sides are as intimate and touching as you might imagine.

The Christmas Truce was also chronicled in the 2005 film Joyeux Noel.

Unfortunately I missed this film when it played (in September, bad scheduling!) at the AFI Silver Theater two blocks from the Peace Action office here in Silver Spring, but the trailer looks great and I’ll try to find it sometime over the holidays.

As John McCutcheon says, the story of the Christmas Truce needs to be told year round, 365 days a year.

Thank you for your actions for peace, and support of Peace Action.

Double Your Impact!Peace Action
The Brain Trust, the Love Circle and the Seed SowersPeace Action