“On the 71st commemorations of the U.S. atomic bombings of Hiroshima and Nagasaki, it’s time to reflect on the deaths of hundreds of thousands – mostly civilians. Knowing that current nuclear stockpiles are dozens to one hundred times more powerful than those dropped on Japan, we must ensure that a nuclear weapon is never used again.

“With Russia and the U.S. possessing around 95% of the 15,000 warheads in the world, America holds great responsibility to move the world towards zero nuclear weapons.  While President Obama has consistently said he believes in a nuclear weapon free world and has taken some steps such as reducing their role in U.S. security plans, negotiating the New START Treaty and leading several international nuclear security summits, he has reduced nuclear weapon stockpiles the least of all post Cold War Presidents.  In the remaining five months of his term, Obama can take steps to live up to his Nobel Peace Prize and his speech given in Prague and most recently in Hiroshima by reducing the dangers of nuclear weapons.

“Some possible steps include:

*  Declare No First Use. The U.S. says it is acceptable for it to use nuclear weapons first in certain scenarios.

*  Take nuclear weapons off high alert.  Currently, nuclear weapons can be launched within minutes putting undue pressure on decision makers and increasing the possibility of launching on bad intelligence.

*  Significantly reduce funding for upgrading the U.S. nuclear arsenal.  The U.S. cannot afford or do we need to spend $1 trillion on nuclear weapons.

*  Reduce our strategic and reserve warheads.  Even Pentagon experts agree we can easily reduce to 1,000 or less strategic warheads which would also allow us to reduce the several thousand warheads in reserve.

*  Create a plan for all nuclear-armed states to negotiate complete nuclear disarmament.”

This is Mr. Martin’s fifth trip to Japan as a guest of one of the largest peace groups, Gensuikyo.  Also, in Japan is Peace Action’s executive director (who will also tour Okinawa to work with the super majority of locals who oppose the U.S. military bases there) and the student president of the Peace Action chapter at Tufts University. 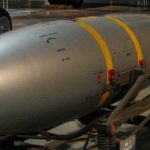