Following presentations and discussions in Peace and Planet’s August 10 assembly at the World Social Forum in Montreal, the following Declaration was adopted. The process at the WSF was interesting, and this declaration owes its genesis to two meetings on nuclear issues prior to our assembly. This is significant in that the World Social Forum, which covers many peace, human rights and environmental issues, has not previously had an ongoing focus on nuclear issues.

Montreal Declaration for a Nuclear-Fission-Free World

As citizens of this planet inspired by the Second Thematic World Social Forum for a Nuclear-Fission‐Free World, conducted in Montreal from August 8 to August 12, 2016, we are collectively calling for a mobilization of civil society around the world to bring about the elimination of all nuclear weapons, to put an end to the continued mass‐production of all high‐level nuclear wastes by phasing out all nuclear reactors, and to bring to a halt all uranium mining worldwide.

This call goes out to fellow citizens of all countries worldwide who see the need,whether as an individual or as a member of an organization, for a nuclear-­fission‐free world. We are committed to building a global network of citizens of the world who will work together, using the internet and social media to overcome isolation, to provide mutual support and to coordinate the launching of joint actions for a world free of nuclear fission technology, whether civilian or military.

We will begin by creating communication channels to share information and educational tools on legal, technical, financial, medical, and security‐related matters linked to military and non‐military nuclear activities. We will pool our resources across national boundaries in a spirit of cooperation, allowing us to contribute to the formulation of a convergent and unified response to counteract the plans of the nuclear establishment that operates on a global scale to multiply civil and military nuclear installations worldwide and to dump, bury and abandon nuclear wastes.

We recognize each nuclear weapon as an instrument of brutal and unsurpassed terror, designed to kill millions of innocent men, women and children at a single stroke. We realize that even a limited nuclear war can provoke sudden extreme climate change on a global scale, crippling agricultural production and threatening the survival of all higher forms of life. We are grimly aware that a nuclear‐armed world will surely destroy itself and set in motion a process that will undo four billion years of evolution. We are determined to help guide the world away from the brink of nuclear annihilation.

We recognize each nuclear reactor as a repository of the most pernicious industrial waste ever known; waste so radioactive that it spontaneously melts down if not continually cooled; waste that, when targeted by terrorists or saboteurs, or by conventional warfare, will render large portions of the earth uninhabitable for centuries; waste that contains material that can be used as a nuclear explosive at any time in the future, for thousands of years to come.

We recognize uranium as the key element behind all nuclear weapons and all nuclear reactors, and we endorse the call by the International Physicians for the Prevention of- Nuclear War and by the 2015 Quebec World Uranium Symposium for a total global ban on the mining and processing of uranium.

We will use our networks

‐to pressure governments everywhere to put an end to nuclear fission

‐to expose the dangers associated with the export and transport of nuclear materials and nuclear waste;

‐to puncture the myths used to prop up and justify our irrational nuclear addiction;

‐to tell the sobering stories of nuclear victims and nuclear refugees;

‐to emphasize our moral responsibilities not to burden future generations with a poisonous nuclear legacy;

‐to warn governments without nuclear facilities to realize the dangers and avoid becoming enmeshed in this technology;

‐to disseminate the findings of engineers, doctors, biologists, ecologists, physicists and concerned citizens having special knowledge and appreciation of nuclear dangers;

‐to promote and popularize the wide variety of renewable energy alternatives that are green and sustainable;

‐to launch lawsuits and to support whistle‐blowers to halt the most egregious examples of nuclear malfeasance;

‐to promote non‐violent conflict resolution, and

‐to denounce the illegal, immoral, and insane obsession with nuclear weapons arsenals.

We invite all people, groups and organizations involved in the effort for a world without nuclear fission and uranium mining, to commit themselves to this effort. We also ask them to endorse this declaration and to transmit it widely in their networks.

This declaration is partly inspired by the Tokyo Appeal issued by the First Thematic World Social Form for a Nuclear‐Free World held in Tokyo and Fukushima in March 2016. 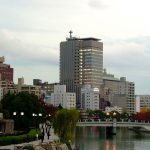 Isn't It Time to Ban the Bomb?Nuclear Weapons