I have always thought of the atomic bombs dropped on Hiroshima and Nagasaki in 1945 as part of history, moments frozen in time. From August 3rd to the 9th, I had the privilege and honor of representing Peace Action at the 2017 World Conference Against the Atomic and Hydrogen Bombs in Hiroshima and Nagasaki, Japan. After hearing first-hand from numerous Hibakusha (survivors of the atomic bombings) and their children, as well as reports from people in countries that have directly suffered from testing, like the Marshall Islands and Australia, I now understand those events to still be very much part of the present.

Besides those living near domestic nuclear facilities and test sites, most Americans have generally enjoyed the luxury of ignorance of the physical impacts of the bombs we have tested and dropped. We haven’t seen our relatives and neighbors burnt to ashes in a split second, nor witnessed their skin dripping from their flesh. We haven’t watched our communities, en masse, be blinded by cataracts, have their hair fall out, give birth to disfigured (or dead) children and die prematurely at alarming rates. We haven’t had to rebuild entire cities. Our children haven’t played in nuclear fallout from tests, thinking it was snow, because they were not informed they should stay inside and avoid contact with the radioactive material. We weren’t used as test subjects afterwards, to measure the effects of radiation poisoning on humans.

While I hesitated to include such graphic descriptions, I know that Peace Action supporters are far more likely than the general population to have some idea of the horrors caused by nuclear weapons; it’s probably an underlying reason for your commitment to our work. The realness of the after-effects of our bombs has now been deeply ingrained in my psyche. While I have spent almost ten years as a full-time grassroots organizer, raising awareness of these issues while building the membership and capacity of Peace Action, I am now more acutely aware of the scope and magnitude of the work ahead of me and even more fully committed to do all I can to eliminate nuclear weapons.

For 72 years, Hibakusha have been working continuously to share their stories, in hopes that history will not repeat itself. They acknowledge Japanese imperialism and war crimes are part of the complete story of the atomic bomb. They have not shied away from discussing the realities of war and nuclear weapons. In fact, A-Bomb survivors often lead in dialogue and research on the issue, in part, because they are still seeking remedy for their ailments. Though the average age of Hibakusha is over 80 years old, they have not retired from their activism, committed to doing all they can to prevent anyone else from having to relive their experience.

News of President Trump’s threat that further North Korean aggression would “be met with fire and fury and frankly power, the likes of which this world has never seen before” arrived in Japan the morning of the anniversary of the bombing of Nagasaki. Not only were his remarks a dangerous escalation of rhetoric, they were also a slap in the face to the victims of the atomic bombings. It was chilling to visit the Nagasaki Atomic Bomb Museum that day, and try to fathom what the damage of today’s nuclear weapons, which are thousands of times more powerful, would look like.

In 1994, when President Clinton was considering force against North Korea, Gary Luck, his commander of U.S.-Republic of Korea forces, estimated that war would likely result in 1 million casualties, and almost $1 Trillion in economic damage. And that’s without the use of nuclear weapons. In recent years, researchers have concluded that even a limited exchange of the tiniest nuclear bombs in our arsenal could trigger a “nuclear winter,” damaging our atmosphere so catastrophically that crops would not be able to grow and leading to mass global famine.

In his first address to the United Nations General Assembly this week, Trump went further, threatening the total destruction of North Korea. One day later in the same building, 51 countries signed onto a treaty to ban nuclear weapons entirely. The juxtaposition is striking.

In the ‘80s during the height of cold war tensions between the US and the USSR, it was massive public pressure focused through strategic organizing that shifted the tides towards disarmament. The members of our organization, then called SANE/Freeze, were at the forefront of that mobilization.

Today, together, we face the very real threat of tensions with North Korea escalating to the point of nuclear war. A few years back, when we were tilting towards war with Iran – Peace Action’s organizers and members flooded their representatives’ offices with calls and letters demanding diplomacy instead of war.

Right now is another key moment for our supporters to take action. Here are 3 quick things you can do right now to make sure we never witness another nuclear mushroom cloud.

1 – Call your Senators and Representative (202-224-3121) and tell them you oppose military escalation and war with North Korea and want them to speak out loudly in favor of diplomacy.

2 – Click here to send them a follow-up email to encourage them to support the Restricting the First Use of Nuclear Weapons Act of 2017 which requires the president to seek congressional approval before initiating nuclear war.

The invention of nuclear weapons unleashed a greater power than humanity had ever seen, as well as a suffering greater than any had previously witnessed. The fire from those bombs is still burning and won’t be extinguished until we eliminate these horrible weapons. The power to push our legislators in that direction lies in our collective action and our future remains uncertain until we succeed. They may say we are dreamers, but we are not the only ones. 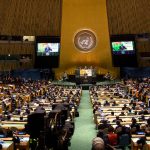 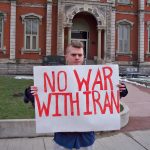