With Iran Deal on Life Support, White House Looks to Finish the Job

This article was originally published in Common Dreams.

Three years after the signing of the Iran nuclear agreement, an array of TV monitors in downtown Vienna still carries live images from Iranian nuclear facilities. Inspectors from the International Atomic Energy Agency (IAEA) still spend 3,000 calendar days a year conducting tests, gathering samples, and generally poking around Iran’s nuclear related facilities. Computers still monitor thousands of tamper-proof seals on nuclear material and equipment just in case the inspectors miss something. In other words, thanks to the deal, we can all still rest assured that all of Iran’s potential pathways to a nuclear bomb remain blocked. But thanks to Trump, that may not be the case for long.

Since the Trump administration’s unilateral withdrawal from the Iran agreement, Europe and Iran have been scrambling to negotiate measures that would maintain Iran’s economic and political incentives to stay in the agreement in the face of renewed U.S. sanctions. After all, the big carrot Iran got for agreeing to strict limits on its nuclear program was relief from crushing economic sanctions. Sanctions relief and the economic benefits associated with it was the only way Iran was able to sell the accord to its domestic audience. Without those benefits, Iran’s continued adherence to the terms of the deal is politically untenable.

With the full spectrum of U.S. sanctions set to kick in by November, the clock is running out for Iran and Europe to find a solution, and the Trump administration is playing some serious hardball. On the sidelines of the NATO summit last week, Secretary of State Pompeo prodded allies to “cut off all funding” to Iran. Meanwhile, when asked about tensions with Iran during a NATO press event, Trump nonchalantly conceded, “I would say there might be an escalation between us and the Iranians.”

Behind these statements is a truly draconian brand of diplomacy. The administration has been pressuring other countries to entirely cut off imports of Iranian oil, breaking with past practices of granting exemptions for countries that significantly reduce imports. It’s also trying to block an Iranian bid to withdraw 300 million euros of its own funds from European banks, which Iran is looking to withdraw out of fear that U.S. sanctions could freeze its assets, as they have in the past.

If the administration’s goal is to ensure the death of the Iran deal, it’s doing a masterful job. But why work to kill the deal when simply withdrawing would have won Trump points with his base and fulfilled his campaign pledge to pull out of it? The answer is likely tied to the ascendance of Mike Pompeo and national security advisor John Bolton, two of the most avid anti-Iran hawks of our time, to Trump’s inner circle of advisors. Both advocated for bombing Iran during the Iran deal negotiations, and both have called for regime change in Iran. John Bolton even gave a speech in 2017 suggesting the overthrow of the Iranian government could be achieved as soon as 2019.

If sanctions and coercive diplomacy by the U.S. escalate into regime change, it wouldn’t be the first time. Ask the Iraqis. Some analysts have suggested that if the U.S. succeeds in effectively shutting down Iran’s oil export industry, Iran may retaliate by shutting down the Strait of Hormuz, a 21 mile stretch of water in the Persian Gulf that 20 percent of the world’s oil currently passes through. If Iran does go to that extreme, as Iranian President Hassan Rouhani implied it might, that could give Trump enough pretext for a military response, which could very easily escalate into a full scale conflict.

But even if Iran keeps its cool in the Strait, absent some improbable success on the part of Europe to salvage enough economic incentive for Iran to remain in the agreement, Iran will almost certainly begin enriching uranium at higher levels than permitted under the deal, and that too could be twisted into a pretext for war.

As most sane observers know, war with Iran would be an unmitigated disaster for the U.S., the region, and the world. Iran is believed to have the largest stockpile of ballistic missiles in the Middle East, which would allow it to inflict immense damage on U.S. military forces in the region. Some reports suggest such a war could lead to thousands of American casualties in the first stage alone. Iran’s cyber warfare program is also believed to be one of the most advanced in the world, which could allow it to inflict significant damage on the U.S. mainland in the event of a war. That’s not to mention the destabilizing effect it would have on the region, and the risk of escalation into a global conflict should other major powers decide to intervene.

Whatever the Trump administration’s true motivations may be, its actions are bringing us closer to war with Iran by the day. Conscientious observers in Congress, the media, and the general public should speak up now against this drift towards war, so that we might avoid yet another disastrous, needless war of choice in the Middle East. 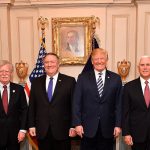 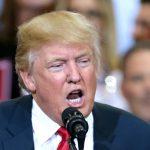 Trump Is Tweeting Threats of War at Another Head of State, AgainIran, Trump Administration