Trump Is Tweeting Threats of War at Another Head of State, Again

Washington, D.C. — July 23, 2018 — In response to president Trump threatening Iran with “consequences the likes of which few throughout history have ever suffered before,” in all caps on Twitter, Jon Rainwater, Executive Director of Peace Action, released the following statement:

“In a single day the Trump administration has firmly steered the U.S. onto a path of confrontation with Iran. Secretary Pompeo’s speech at the Reagan library laid out this course in stern and antagonistic language that could not have been clearer. But President Trump wanted to drive home the message. Once again, he tweeted out threats of war in all caps at another head of state. But this time, the whole administration appears to be working in lock step to lay the groundwork for a military confrontation. By lodging personal attacks against Iran’s supreme leader, making demands that no one believes Iran can fulfill, and hinting at regime change, the administration is making clear that military action is very much on the table.

“Ironically, Trump’s tweet chastised Iran for the very language Trump employed in his tweet, namely his ‘demented words of violence and death.’ Iran recently warned that a ‘war with Iran is the mother of all wars,’ while also underlining that ‘peace with Iran is the mother of all peace.’ Trump’s language on the other hand lacked any hint of a desire for peace. Every peace loving person in the U.S. needs to press the president to tone down his rhetoric and rethink this march to war.” 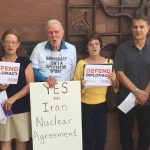 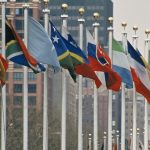