April 27, 2020 Our diverse group of 39 think-tanks, non-profits, faith-based organizations, and advocacy groups based in the United States find the exorbitant amount of money spent on militaries worldwide to be an irresponsible and harmful use of global wealth.

The Global Military Expenditures Report released today shows that in 2019, countries spent $1.917 trillion on militaries. As U.S-based organizations, we are especially critical of the huge share spent by the United States, which accounted for 38% of military spending around the world in 2019. This is not just a U.S. issue, however, and we join organizations from Spain to New Zealand who are speaking out in response to this report.

The devastating impact of this $1.917 trillion in military spending has become painfully clear in the United States as we struggle to keep pace with the healthcare needs created by the COVID-19 pandemic. Had our government chosen to invest in hospitals, production of life-saving medical devices, and the training of medical professionals across the country in 2019, our health system would be better prepared to face the current threat to our safety. Instead, it chose to sink $732 billion in taxpayer dollars into weapons and endless wars.

The release of 2019 Stockholm International Peace Research Institute (SIPRI) data on global military expenditures reaffirms what has been true for decades – the United States spends an astronomical amount of money on the Pentagon. Under the guise of providing ‘security,’ this spending has actually made global communities less safe, hindered the global economy, and contributed to environmental degradation. At a time when public health concerns are paramount, it is unconscionable that our leaders continue to pour money into weapons & war instead of prioritizing global cooperation and investment in industries like healthcare.

Though our respective organizations’ views may differ on why the bloated U.S. military budget is so harmful, we all agree on one thing- U.S military spending must be reduced. We call on the United States to reduce Pentagon spending. 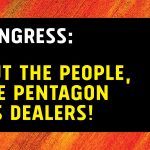