Treaty on the Prohibition of Nuclear Weapons

Today, the Treaty on the Prohibition of Nuclear Weapons (TPNW) officially enters into

force, making nuclear weapons officially illegal under international law. The treaty bans the development, testing, production, manufacture, acquisition, possession or stockpiling, transfer, control or receipt, use or threat to use, stationing, or deployment of any nuclear weapon.

This marks a huge victory for the nuclear abolition movement! Indeed, the International Campaign to Abolish Nuclear Weapons, of which Peace Action is a partner organization, won the Nobel Prize in 2017 for successfully ushering the treaty through the United Nations.

To date 51 countries, with dozens more on the way, have voted to ratify the TPNW. Sadly predictable, the nine nuclear powers have refused to sign the treaty and instead continue to engage in a nuclear arms race threatening the likeliness of a nuclear war. Here in the U.S., only pressure from within can move the needle toward truly getting rid of these horrific weapons. For the past 63 years, Peace Action has helped lead the charge toward nuclear disarmament, and we’ll continue to do so until every last weapon is gone.

Despite their efforts, the nine nuclear-armed countries have been unable to reverse the growing acceptance of the TPNW. Advocates have called it the most far-reaching effort undertaken to permanently avert the possibility of nuclear war, a shadow hanging over the world since the United States dropped atomic bombs on Japan over 75 years ago.

It’s our role and responsibility to push the TPNW’s momentum here in the States.

In addition to this monumental treaty entering force, we also think the incoming Biden administration could provide opportunities to move the needle. Biden is a long-time supporter of nuclear arms control and disarmament agreements—as well as a sharp critic of the Trump administration’s nuclear policies during the 2020 presidential campaign. The new president could advance policies dealing with nuclear issues that differ significantly from those dangerously pursued by Trump. Although his ability to secure U.S. ratification of new treaties will be severely limited by Senate Republicans, we can push for executive action to rejoin the Iran nuclear agreement, extend New START, re-sign the Open Skies Treaty, block the U.S. production and deployment of particularly destabilizing nuclear weapons, and reduce the budget for nuclear “modernization.” We’ll push hard to get him to declare a no first use policy and unilaterally reduce the U.S. nuclear arsenal.

Historically, it’s also important to look at the impact of other treaties that have outlawed weapons–such as chemical and biological weapons, land mines, and cluster bombs. Even if not universally accepted at first, these treaties have shamed other countries into joining them or at least curbed the use of the abhorrent weapons. We can do the same with the TPNW.

Toward a world free from the scourge of nuclear weapons! 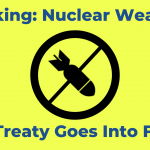 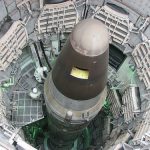