The U.S. is in the early stages of developing a new nuclear weapons system, an intercontinental ballistic missile (ICBM) dubbed the Ground-Based Strategic Deterrent or GBSD but more accurately described as the Money Pit Missile. Its initial price tag is $100 billion, with a lifetime cost of well over twice that. The GBSD is designed to replace the Minuteman III missiles now deployed in North Dakota, Montana, Wyoming, Nebraska and Colorado. Northrop Grumman serves as the main contractor, with many subcontractors involved as usual in large military projects.

Critics, including Peace Action and dozens of other organizations, think the GBSD is too expensive and unnecessary, even dangerous and provocative, and runs counter to the direction the US and the world needs to go in, toward eliminating nuclear weapons worldwide. The program’s fate will likely be decided this year, so action to stop this monstrosity before it gets too much traction (and funding) is timely. Following are resources for education and action:

Bulletin of the Atomic Scientists (long but good article by Elisabeth Eaves, it delves into local, national and global aspects of the issue.)

The Guardian on the early state of play on the issue

Federation of American Scientists’ report on Alternatives to GBSD. Another report is to be published soon. 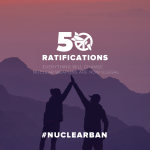