Bold & Sustained Negotiation is Urgently Needed to Save Ukrainian Lives

Russia’s illegal invasion of Ukraine and gross human rights violations are causing immense human suffering. There is no viable military solution here, despite the unity displayed by the Ukrainian people. Diplomacy must not be paused during battle – in fact, it becomes even more urgent to stop the bloodshed and save lives.

While it’s unclear whether Russia is yet willing to negotiate diplomatic off-ramps, the U.S. must seek to prevent the unthinkable alternative. The best way to save lives is to find a way to craft a settlement that would cause Russia to withdraw all its forces. As one European diplomat said recently: “It’s like the Sun Tzu thing of giving your enemy a golden bridge to retreat across. How do you get him to go in a different direction?” Both Putin and Zelensky have broached neutrality and a solution should be explored that would respect Ukraine’s sovereignty while maintaining neutrality – akin to precedents with Finland or Austria. Arms control measures about nuclear weapons and missiles could also be part of a possible off-ramp.

Another complementary diplomatic move could involve sanctions. Samuel Charap writes that lifting some sanctions could “push Putin to abandon his core war aim of decapitating the Ukrainian government and installing a pro-Russian puppet. Using relief of the central bank sanctions, for example, to compel a cease-fire and a negotiated settlement would not only minimize human suffering in Ukraine, but it could also signal the limits of Western intentions, making clear the sanctions are not about overthrowing Putin’s regime.”

Our representatives must speak out publicly and tamp down escalation to prevent a potentially catastrophic world war. They can reinforce Congressional war powers, making it clear that they do not support sending U.S. troops or pilots into the battle and opposing escalatory tactics like a “No Fly Zone.” A “No Fly Zone”, and other direct U.S. interventions, are euphemisms for a shooting war between the world’s two biggest nuclear powers.

Loose militaristic talk about “bloodying Putin’s nose” should not be reinforced. The U.S. should be working to protect Ukrainian lives, not treating the people as a vehicle to confront the Russian autocrat. Instead we need “deconfliction” and de-escalation. The U.S. should, as the Arms Control Association recommends, “avoid new and destabilizing military deployments, dangerous encounters between Russian and NATO forces, and the introduction of new types of conventional or nuclear weapons that undermine shared security interests.”

As the crisis grows we will need increased humanitarian and economic aid and assistance for displaced Ukrainians at a more generous level to meet this challenge. Diplomatic pressure should be brought to bear to support the Ukrainian effort to facilitate humanitarian corridors. U.S. support to Ukraine over the last years has had a lopsided military emphasis. With roughly 10 million displaced persons and counting, we need to increase resources for humanitarian aid, refugee assistance, and resettlement. Globally, we are facing the worst refugee crisis since WWII. The U.S. cap should be significantly increased to protect at least 250,000 refugees. Congress should support programs reflecting racial equity on a scale sufficient to meet the challenge.

Centering civilian protection means ensuring that sanctions with economy-wide impacts don’t lead to humanitarian harm. Holding the Russian government and the individuals responsible is important right now. But Congress must perform oversight to make sure the U.S. is not engaging in “collective punishment.” Sanctions’ economic impact can cause dire public health consequences, including malnutrition and increased infant mortality. It would be ironic indeed if sanctions were to punish the ordinary Russians who have shown such extraordinary courage in openly opposing their leaders’ brutality. More broadly, sanctions have become a “tool of first resort” for the U.S. – their use has gone up by 933% over the last two decades. Congress must enact reforms to evaluate the impact of sanctions and remove those that are harming civilians.

Since the start of the war in Afghanistan, Pentagon spending has totaled roughly $14 trillion dollars with one-third to one-half of the total going to military contractors. Increased spending was sold as needed to “deter Putin” and “defeat the Taliban”. It didn’t work. Congress must ask that the Pentagon make whatever adjustments necessary, without what analyst Bill Hartung warns might lead to “an open-ended commitment that would boost U.S. military involvement in Europe back towards Cold War levels, or create a loosely regulated slush fund like the account that was used to finance the Iraq and Afghan wars.” This crisis also shows just how dangerous nuclear weapons are, we need to redouble efforts for nuclear arms control and disarmament, not invest in new weapons systems and a new nuclear arms race.

This Crisis Underlines the Need for a US Foreign Policy Reset

This war should be a wake-up call that it is time to invest in peace and human security and redouble efforts to prevent political violence. No country should have to bear the horrors of war we are seeing vividly in Ukraine. At the same time, non-military challenges are proving to be our nation’s gravest threats. One million people have died of COVID, yet we have underfunded our healthcare systems and done far less than we should to ensure global vaccine equity. Weather events caused by climate change are ravaging our communities.

When it comes to conflict prevention and conflict resolution, diplomacy and nonviolent measures are underpublicized, underutilized, and underfunded tools. The Pentagon budget is 13 times larger than the combined budgets of the State Department and USAID. Many top U.S. diplomats and analysts warned of the risks of increased tensions or war that NATO expansion posed and the need for a sustainable peace and security architecture for Europe. While Russia is 100% responsible for its unconscionable invasion, critical opportunities were missed to de-escalate tension between NATO and Russia and work harder to prevent war.

The U.S. also must ensure that our own policies do not fuel conflict and instability through military intervention and weapons sales to oppressive governments. Greater moral consistency, by opposing the bombing of Mariupol and ending support for the bombing of Sana’a in Yemen, would be a powerful foreign policy tool.

Things the Public and the U.S. Can Do to Support Ukrainians and End the War 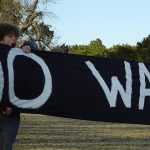