Ending Wars in the Middle East

For nearly two decades, the United States has been in a perpetual state of war. Following the 9/11 attacks, Congress passed the 2001 Authorization for the Use of Military Force (AUMF), which has been used nearly 40 times to justify U.S. military actions in 14 countries. Intended as an authorization for force against the perpetrators of the 9/11 attacks, the overly vague authorization, with no geographic limits or expiration date, has been stretched beyond belief. It is the reason an entire generation has grown up not knowing a time without war. That’s why repealing the 2001 AUMF has been and remains a top priority for Peace Action.

Our longest war is only getting longer.

What began in 2001 as an effort to target al Qaeda evolved into a struggle against the Taliban, and if 16 years of war there has taught us anything, it’s that the conflict has no military solution. By 2010, the U.S. had about 100,000 troops in Afghanistan. Since then, Peace Action has worked with allies in Congress like Sen. Jeff Merkley (D-OR) to draw down our presence to fewer than 10,000 troops. Unfortunately, President Obama reversed his decision to continue that draw down, leaving the future of the war in the hands of President Trump. 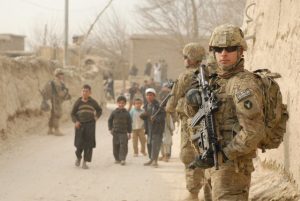 Since taking office, Trump has decided to allow the Pentagon to set troop levels in Afghanistan and elsewhere, and has escalated the U.S. air war by dropping the so-called Mother of All Bombs, the largest non-nuclear weapon in the U.S. arsenal, in Afghanistan.

Peace Action maintains that only a political settlement can end the war in Afghanistan, and that further escalations of U.S. military force only serve to undermine prospects of such a solution. Rather than doubling down on a failed military approach, the U.S. should withdraw its forces and focus on facilitating a diplomatic solution.

Peace Action has long advocated alternatives to war for addressing conflict and the threat of terrorism. In the 21st century, U.S. militarism has done more to fuel terrorism than to suppress it, bolstering the recruitment narratives of extremist groups like ISIS and al Qaeda, and contributing to the economic and political instability that allows these groups to flourish. While the U.S. military campaign against ISIS has had battlefield successes, it has also killed thousands of civilians, destroyed civilian infrastructure, and increased the risk of conflict with other nations.

In Iraq, the U.S. invasion created a power vacuum and widespread resentment of the U.S., creating the conditions that allowed ISIS to rise to power. While some have credited the withdrawal of our forces from Iraq in 2011 as the main factor in allowing ISIS to spread, the initial decision to invade, along with our insufficient focus on political reconciliation after the war, are largely to blame.

In Syria, the Obama administration argued that operations against ISIS were covered under the 2001 war authorization, a dubious assertion at best given that the authorization was supposed to be about bringing justice to those responsible for the 9/11 attacks. But President Trump’s attacks against Syrian government forces and their allies since taking office have no basis in U.S. or international law. As ISIS is pushed from its strongholds in Syria, the U.S. is increasingly at odds with a multitude of forces and nations with conflicting interests. Along with ramping up airstrikes and loosening the rules of engagement, leading to a sharp rise in civilian casualties, the Trump administration has been stumbling into a larger conflict in Syria that could lead to all out war with the Syrian government, as well as conflict with Iran and Russia.

Like the other U.S. conflicts in the Middle East, diplomacy is the only path to sustainable peace in Iraq and Syria. The U.S. should recommit itself to diplomatic efforts to end the Syrian civil war and reach a political solution to return stability to the war-torn country. We should also work to facilitate the delivery of humanitarian aid to those in need, and plan to invest in rebuilding Iraq and Syria’s devastated infrastructure.

Since March 2015, the U.S. has been supporting a Saudi-led coalition in its brutal intervention into Yemen’s civil war. The coalition’s indiscriminate bombing campaign has bombed schools, hospitals, marketplaces, and mosques, killing thousands of civilians in the process. The coalition’s naval blockade, along with it’s bombing of civilian infrastructure, has pushed Yemen to the brink of famine. Roughly 20 million people are at risk of starvation. Lack of food, fuel, and medical supplies has also led to an outbreak of cholera that has killed thousands. Human rights groups and the United Nations have accused the coalition of war crimes.

The U.S. has been refueling the coalition’s warplanes, participating in the naval blockade, and has sold the coalition tens of billions of dollars worth of weapons since the start of the intervention. Fragments of U.S.-made bombs found in the rubble make U.S. complicity in Yemen’s suffering abundantly clear to the people of Yemen.

Peace Action has been building awareness of this grossly underreported war, and building opposition in Congress to ongoing U.S. support for the coalition. We’ve also been lobbying against further arms sales to Saudi Arabia, helping to bring 27 Senators on board with blocking an arms sale in September 2016, and helping push that number to 47 Senators in June 2017. At the same time, we’ve been pushing the administration to focus on facilitating a diplomatic solution to Yemen’s civil war, and to ensure the delivery of humanitarian aid to the millions of Yemenis who could die without it. As long as the U.S. continues supporting the Saudi-led coalition, Peace Action will continue pushing back, demanding an end to U.S. complicity and promoting the diplomatic and humanitarian strategies needed to end Yemen’s suffering.