The recent presidential pardons of  Dustin L. Heard, Evan S. Liberty, Nicholas A. Slatten and Paul A. Slough once again demonstrate Trump’s flagrant disregard for human rights. The Blackwater pardons share their nativist worldview with President Trump’s pardon of a former U.S. Border Control agent convicted of assaulting compliant suspects at the border and violating their civil rights. These high profile pardons of violent crimes send a message that undermines human and civil rights both here and abroad. The ugly streak of racism and xenophobia Trump brought to the office is laid bare in a particularly vivid and brutal form.

The Blackwater case was extremely high profile worldwide at the time. It was, alongside the Abu Ghraib prisoner abuse case, one of the iconic human rights violations by the U.S. during the Iraq War. One of the lawyers involved in this case pointed out the unforgettable historic nature of the case saying, “This was Baghdad’s Bloody Sunday.” At the time, these cases were huge blows to U.S. standing in the world. By showing that these crimes are now excused, Trump has done serious damage to U.S. standing once again. President-elect Biden must seek to repair the damage Trump has done to human rights, first and foremost through extricating the U.S. from the endless wars that inexorably give birth to these types of human rights abuses.

The human toll of the Blackwater crimes was immense. Three of these men were found guilty of voluntary manslaughter, and Slatten was convicted of first-degree murder for a opening fire in a busy, public street in Baghdad during their employment as mercenaries for the firm Blackwater, which did much of the government’s work in the war on and occupation of Iraq. This pardon is a violation of international law, something that doesn’t seem to faze this administration. Worst of all, though, is that these men will now go free for the deaths of 17 Iraqi civilians.

The loss of those 17 lives, as well as the injuries sustained by more than a dozen more were a direct result of these men’s unprovoked shooting in Nisour Square in 2007. In the years following the massacre, more than 30 witnesses traveled from their homes in Iraq to the United States to testify in the trial of the men. The pardons show them that the American justice system will not bring any sense of justice for those who died or were injured.

The Iraqi people deserve better than this. The pardons send a message that Iraqi lives are not valued by the U.S. The pardons also deliver a clear message about the Iraq War, which Peace Action strongly opposed when it started in 2003. With the pardons, we see the U.S. government once more fail the people of Iraq at a time when that country still struggles from the aftermath of our intervention. Many Iraqis, not just those involved in this massacre, continue to suffer from the ongoing U.S. involvement in Iraq. These pardons should enrage American citizens. We need to take the shock of these pardons, even if we aren’t surprised, and turn that into demand for a new foreign policy that genuinely respects the residents of other nations. 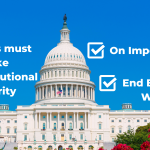