Some good (and even kinda funny!) news on nukes 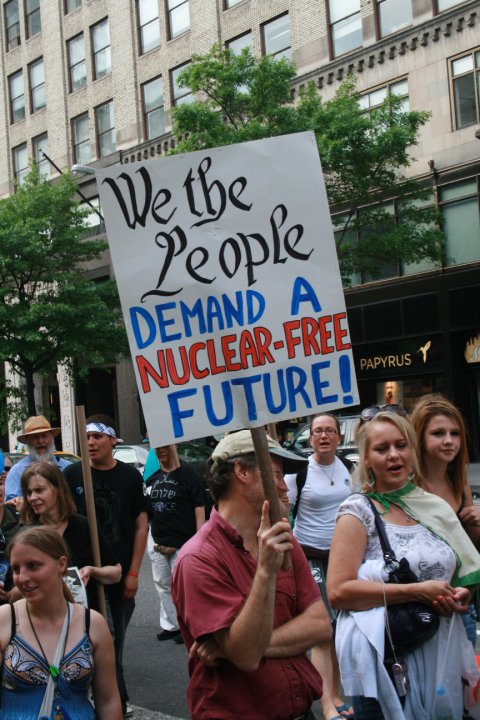 While you might not have known it from the scant attention they received in the recent midterm elections, there is a lot brewing on Peace Action’s top priority issues these days. We’ll have more for you soon on a possible breakthrough deal on Iran’s nuclear program (the current deadline for a deal is in two weeks, though it could be extended), as well as potentially interesting developments on the Pentagon’s budget. For today, here are some items you might have missed regarding nuclear weapons issues (good news), and I’ll do another post on Iraq and Afghanistan (definitely mostly bad news).

–U.S. to attend Vienna conference next month on the humanitarian consequences of nuclear weapons: Peace Action has helped lead national and international efforts to press the Obama Administration to more faithfully participate in various international fora on nuclear disarmament, with not a lot of success to date. The U.S. skipped the first two conferences in this relatively new push regarding the humanitarian impact of nuclear weapons, but the State Department announced Friday it would send representatives to the third such conference in Vienna in early December.  We signed onto a letter initiated by our colleagues at the Arms Control Association urging U.S. participation, so this is definitely good news, and we’ll keep you updated on the conference, U.S. participation, and follow-up steps. What the U.S. reps say and do at this confab will have even more resonance as the international community prepares for the every five years Nuclear Non-Proliferation Treaty Review Conference (NPT RevCon) at the United Nations in New York City next April. Peace Action will once again help lead national and international groups in organizing around the RevCon, we’ll have more information on this in the New Year.

–Updated Don’t Bank on the Bomb report released: This terrific resource, which catalogs the banks, insurance companies, mutual funds and other businesses that help support and finance nuclear weapons contractors worldwide, was released last Friday. It’s a great educational and action tool, as even most peace activists are likely unaware of the web of financial links so many seemingly non-military related companies have to the production of nuclear weapons. Check it out, you’ll want to know if companies you deal with are involved. Some Peace Action supporters have used the report to withdraw investments from firms they had long done business with, over the companies’ financial ties to nukes. You may want to do the same.

-And the funny (sort of): Death Wears Bunny Slippers: Hanging out with the disgruntled guys who babysit our aging nuclear missiles – and hate every second of it, a terrific article in Mother Jones magazine about the decay of the ICBM force and the morale and performance of the Air Force personnel who allegedly safeguard them.