Today, 22 Representatives delivered a letter to President Obama asking him to adopt a no-first-use policy on nuclear weapons. They applauded the vision he laid out in his 2009 Prague speech “to seek the peace and security of a world without nuclear weapons,” and expressed their concern that current U.S. and Russian nuclear postures “significantly increase the risk of catastrophic miscalculation and full-scale nuclear war.”

Opponents of a no-first-use policy cite fears that it could be interpreted as a sign of weakness and remove a supposedly invaluable deterrent to conventional aggression against the U.S. or our allies. But as the letter points out, the overwhelming superiority of our conventional military forces is more than sufficient to respond to non-nuclear aggression and is a more credible deterrent than maintaining the unrealistic and destabilizing threat of a nuclear first strike.

In the letter, the authors spelled out just a few of the benefits of a clear no-first-use policy:

The letter comes on the heels of the introduction of the bicameral Restricting First Use of Nuclear Weapons Act of 2016, which, if passed, would require a declaration of war from congress before the President could launch a nuclear first strike.

It also follows a July letter from 10 Senators asking President Obama to take a range of steps to reduce the risk of nuclear war, including “scaling back excessive nuclear modernization plans, adopting a policy of no-first-use of nuclear weapons, and canceling launch-on-warning plans.”

When President Obama made history in July by becoming the first sitting U.S. president to visit the Japanese city of Hiroshima, he stated with conviction that “among those nations like my own that hold nuclear stockpiles, we must have the courage to escape the logic of fear and pursue a world without them.” With just over three months left in office, many remain hopeful that he will follow his own advice and have the courage to announce to the world that America will never again use nuclear weapons first.

President of the United States

We applaud the vision that you laid out in your 2009 Prague address to seek the peace and security of a world without nuclear weapons. Therefore, as your administration reviews potential initiatives to further reduce the danger from nuclear weapons, we write to urge you to adopt a clear policy of no-first-use of nuclear weapons.

We are troubled by the current U.S. and Russian launch-under-attack postures, which significantly increase the risk of catastrophic miscalculation and full-scale nuclear war. This problem is exacerbated by our current nuclear weapons policy, which is a dangerous and outdated vestige of the Cold War practice of leaving the nuclear option “on the table” to respond to certain non-nuclear threats to our homeland and our allies.

As you know, were the United States to exercise its contingency plans to use nuclear weapons first in a conflict against a nuclear-armed adversary, a full-scale nuclear exchange could ensue, killing thousands of civilians. For the security and safety of the world, military options that can spiral towards mutually assured destruction should not be on the table.

Shifting to a no-first-use policy is the right thing for today’s 21st century security needs. Moreover, this new policy would not undermine our nation’s ability to protect our allies, including Japan, South Korea, and our NATO allies in Europe. The United States has and will retain overwhelming conventional land, sea, and air forces to counter any non-nuclear attack on their territory. Furthermore, given the indiscriminate nature of nuclear weapons, it would be unwise for a U.S. President to use nuclear weapons — for the first time in more than seven decades — to deal with a non-nuclear threat.

A clear no-first-use policy also has a number of benefits, including:

Your visit to Hiroshima and pledge to “end the logic of fear” gave the world renewed hope that the United States would take meaningful steps to reduce the nuclear threat. We believe now is the time to make this policy change and urge you to move forward without delay. Thank you in advance for your consideration and we look forward to working with you in the final months of your administration.

You can make a difference in key races next month!2016 Election, Congress, Congress, elections 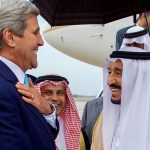